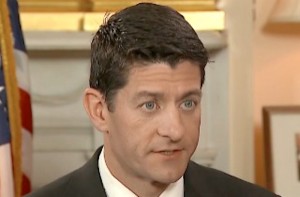 Paul Ryan has been put under a lot pressure lately over his refusal to retract support for Donald Trump this week, and John Dickerson is the latest news media figure to take a whack at questioning him on it.

“As Republicans, as conservatives, we want to run inclusive campaigns,” Ryan said in a preview of an interview to air on Sunday’s Face the Nation. “We want to run an inspiring campaign. We want to inspire our fellow citizens and we want to earn a mandate to fix the country’s problems, and that’s the kind of campaign that we are hoping for.”

Despite saying the mogul’s attack on a judge’s Mexican ancestry were the “textbook definition of racism,” Ryan is still endorsing Trump and hoping that he learns to evolve in his behavior. This comes despite there being no real public proof of any growth in Trump’s antics.

CBS released a glimpse of Ryan’s discussion with Dickerson, in which he’s apparently still reaching out for the mirage that is an improvement in “tone” from Trump’s campaign.

“Hopefully, you know, we can learn from this and move forward with a better tone and campaign that everybody can be proud of, that unifies people, that doesn’t divide people,” Ryan said. The speaker went on beseech Trump to not play the “identity politics” Ryan accused liberals of playing.