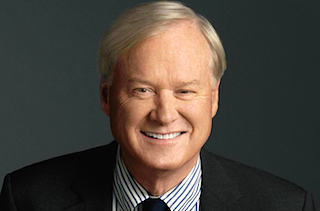 Hardball with Chris Matthews was the highest-rated show on MSNBC Wednesday evening in both the 25-54 demo and total viewers. The 7 p.m. show had 161K viewers in the demo and 770K total viewers, putting it in second place behind Fox News’ On the Record with Greta Van Susteren, which had 244K in the demo and 1.480M total.