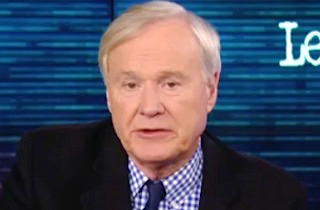 With 113K in the 25-54 demo and 565K total viewers, Hardball with Chris Matthews was the highest rated show across MSNBC’s schedule Wednesday, outpacing the primetime lineup in both categories. During the 7 p.m. time slot, Chris Matthews came in third place in the demo behind Fox News’ On the Record with Greta Van Susteren and Erin Burnett OutFront and second place in total viewers ahead of CNN.

Similarly, MSNBC came in third place in the demo in primetime with 99K viewers and second place in total viewers with 478K.