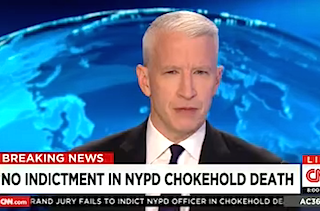 During last night’s protests in New York City following the Eric Garner grand jury decision, CNN’s 8 p.m. broadcast of Anderson Cooper 360 was the second most-watched hour in all of cable news in the 25-54 demo with 450K viewers. Only Fox’s The O’Reilly Factor, with 455K viewers, was watched by more people Wednesday night.

In total viewers, Bill O’Reilly was also #1 overall with 2.818M though Anderson Cooper did succeed in topping 1 million viewers during both the 8 and 9 p.m. hours.