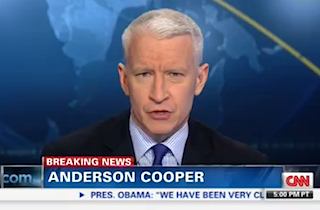 By covering the missing Malaysia Airlines flight 370 for the full 8pm hour Wednesday night, CNN’s Anderson Cooper 360 beat Fox News’ The O’Reilly Factor in the 25-54 demo for the first time in nearly a year. Anderson Cooper drew 431K viewers in the demo while Bill O’Reilly had 386K. The last time Cooper beat O’Reilly when both men were hosting was on Wednesday, May 8th, 2013, in which Cooper’s exclusive interview with Cleveland kidnapper hero Charles Ramsey propelled him to beat O’Reilly by 29k demo viewers.