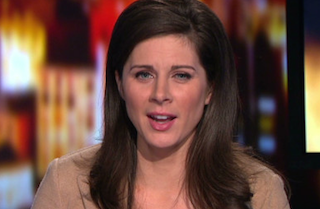 For the second time this week, CNN’s Erin Burnett OutFront was the highest-rated cable news show in the 25-54 demo during the 7 p.m. hour. On Wednesday night, Erin Burnett had 240K viewers, compared to 236K for MSNBC’s Hardball with Chris Matthews and 235K for Fox News’ On the Record with Greta Van Susteren. (Note: Kimberly Guilfoyle was filling in as guest host).