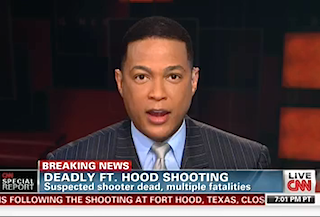 During the 10pm hour Wednesday night, CNN’s Don Lemon-anchored live coverage of the Fort Hood shooting was #1 in the 25-54 demo with 509K viewers, beating Fox’s Hannity, which had 383K and MSNBC’s The Last Word with Lawrence O’Donnell, which came in at 153K. Hannity was #1 in total viewers during that hour with 1.843M, with CNN coming in second with 1.242M.