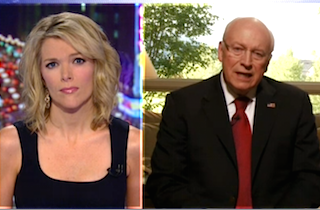 Megyn Kelly’s exclusive interview with Dick and Liz Cheney Wednesday night helped make Fox News’ The Kelly File the highest-rated cable news show in the demo with 389K viewers. Kelly came out ahead of Fox’s The O’Reilly Factor, which had 378K viewers in the demo. Fox’s The Five came in third with 330K viewers.