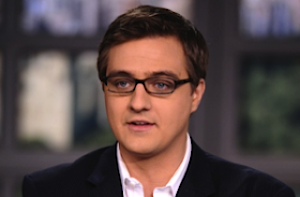 With just 75K viewers in the 25-54 demo Wednesday night, MSNBC’s All In with Chris Hayes was the lowest rated cable news show in primetime. During his 8 p.m. time slot, The O’Reilly Factor on Fox News had 7 times as many viewers in the demo with 529K, while CNN’s Anderson Cooper 360 and HLN’s Nancy Grace each doubled Chris Hayes with 151K and 150K, respectively.