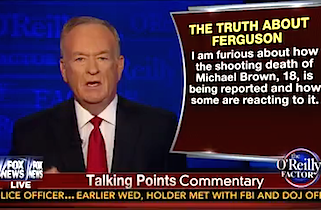 Bill O’Reilly returned from vacation last night, and in the process helped Fox News regain its primetime demo lead over CNN, which has seen a surge in viewership with its coverage of Ferguson, Missouri.

The only place CNN beat Fox was during the 5 p.m. hour when The Situation Room with Wolf Blitzer came out ahead of The Five in the demo, 392K to 390K.