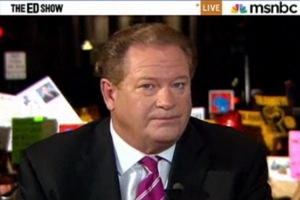 Just three days after moving into his new time slot, Ed Schultz dropped to fourth place in the 25-54 year-old demo at 8 p.m. on Wednesday, falling behind Bill O’Reilly, Anderson Cooper, and Nancy Grace. The 178,000 viewers he attracted in the demo at 8:00 also registered as the lowest-rated show on MSNBC that night. Schultz even lost to his repeat at 11:00, which drew 209,000 viewers and finished second in the time slot (again, behind O’Reilly). The man who swapped spots with Schultz and took his slot at 10:00, Lawrence O’Donnell, had MSNBC’s highest demo ratings of the night, attracting 278,000 viewers.

Other nuggets from the Wednesday night schedule:

Here are the complete cable news ratings for Wednesday night: