Welfare Activist Unloads on Detroit Reporter: ‘You Can Tell He’s Lying, His Lips Are Moving!’
video

Welfare Activist Unloads on Detroit Reporter: ‘You Can Tell He’s Lying, His Lips Are Moving!’ 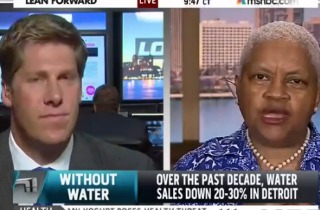 A Michigan activist ended up going off on a local news reporter during a Tuesday MSNBC appearance, scolding him for saying that the current water crisis in Detroit has partly to do with people who just don’t want to pay their water bills. She shouted at one point, “You can tell he’s lying, his lips are moving!”

WDIV reporter Hank Winchester said people have been ignoring their water bill for months, but the state water department is willing to cut a deal. Maureen Taylor, the state chair of the Michigan Welfare Rights Organization, shot back, “Shame on Hank! Shame on him for putting that lie and that disinformation out on the air! To suggest that people don’t want to pay for a water bill is scandalous!”

She said “it’s an outrage” to hear him say that when there are people who simply can’t pay those bills, while big companies in Detroit still owe lots of money for their water bills and haven’t been threatened with shutoffs.

As Winchester kept talking, Taylor repeatedly said, “Shame on you.” He told her of course there are people with financial issues, but there are simply some who don’t want to pay their bill. Taylor ended the segment on a pretty firm note, when asked what she would like to happen next:

“I can’t tell you what I want to happen because I don’t want to speak those words. But the next time you invite me to be here, let’s have some truth and a fair exchange as opposed to Hank, who doesn’t know what the hell he’s talking about, gobble up all the time.”