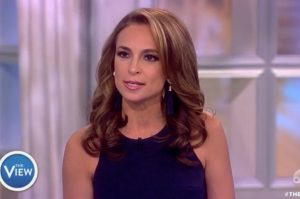 It would appear that Kellyanne Conway didn’t enjoy her time on The View, because she seemed to send a critical tweet their way, and co-host Jedediah Bila didn’t let it slide on Friday.

The Donald Trump campaign manager appeared on the show yesterday, where she went back and forth between defending her boss for fat-shaming a woman and defending her boss for reportedly violating America’s trade embargo with Cuba. Conway seemed to confirm at least part of what Newsweek documented about Trump’s Cuban dealings, and after she left, she seemed to bash the show she just appeared on via Twitter:

For those getting hard news fr. @TheView, biz officials tell me Trump: 1) did no biz in Cuba 2) respected embargo 3) was critical of Castro

While discussing the matter again today, Conway’s tweet came up, and Bila was not pleased by the slight against the show.

"The issue is hypocrisy here," @JedediahBila says of whether or not Donald Trump violated U.S. embargo with Cuba. https://t.co/v2HS7aMmHx

Bila is a political columnist and former Fox News contributor, and so, she showed off her journalism chops by outlining the details of the report. Bila explained that voters will care about this issue, especially if Trump did something hypocritical like exploring ways to make money under the Fidel Castro regime while publicly supporting the embargo.