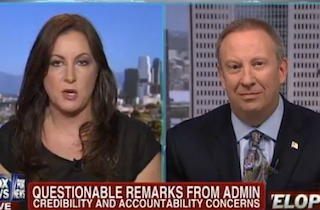 Can we trust the government? Such was the question Megyn Kelly posed to her panel on Friday afternoon. While her guests couldn’t agree on how terrible and misleading administration officials have been, they had a consensus on the problematic lack of accountability. How, they asked, can officials simply lie and get away with it?

“What were these officials thinking?” Judith Miller asked, responding to clips of officials responding to questions about the IRS and NSA during congressional hearings. That Attorney General Eric Holder hasn’t provided much of an explanation shows that the administration doesn’t feel they owe one. It’s “reprehensible.”

“To suggest the Obama administration has a credibility problem, is like saying a bear has a tendency to go to the bathroom in the woods,” Mike Gallagher argued. The revelations and deceptions just keep coming. “We’re down the rabbit hole,” he added.

Kelly particularly pressed on the point of the Director of National Intelligence James Clapper blatantly saying the government doesn’t collect data on Americans. “Where is the accountability?” she asked. “Why do they just get a pass on this?”

It’s one thing, she and Leslie Marshall agreed, to say they’ll talk about it privately — and another thing entirely to lie. But Marshall then sought to offer Gallagher a dose of “common sense.” So much of our information has already been out there, she argued — based on things like credit card purchases, for example.

Kelly returned to her original point, driving home the fact that those behind these controversies are not “underlings.” Miller and Gallagher agreed, going after the administration for getting away with “brazen lies.” Remarks under oath that are untrue are a serious matter, Kelly emphasized.

Differing a bit, Marshall argued that officials have been misleading but, in Holder’s case for example, it has not constituted perjury. Kelly however could not get over the NSA chief’s response about data collection, again replaying the clip.

Taking a shot at Marshall’s abandoned legal aspirations, Gallagher explained that lying under oath is perjury — and the scrutiny over the issue is deserved. “Do they all lie?” Kelly lamented, referring to past administrations. Miller replied that they are “human.”