‘We’re Laughing at You’: Maddow Slams GOPers Who Skipped Bergdahl Briefings to Do TV Hits
video

‘We’re Laughing at You’: Maddow Slams GOPers Who Skipped Bergdahl Briefings to Do TV Hits 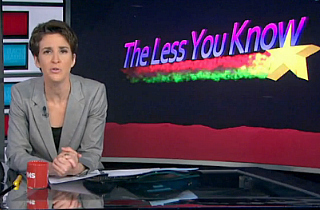 On Friday evening, Rachel Maddow tore into several Republican lawmakers who skipped private briefings on the Bowe Bergdahl swap to hold press conferences or make TV appearances lamenting the lack of information on the administration’s actions.

Maddow noted that on Wednesday, Senator John McCain (R-AZ) left a private Senate briefing on Bergdahl early to hold a press conference demanding more information. “I learned nothing in this briefing,” he told reporters.

“The one he left in the middle of,” Maddow mocked on Friday. She noted that this isn’t the first time the former GOP presidential nominee skipped a briefing to make public appearances. In November 2012, he ditched a Benghazi briefing to hold a presser demanding more information on the Benghazi attacks. When challenged by CNN, the senator aggressively defended his right to hold conference.

“It is so much more fun to demand information than to actually receive it,” Maddow said on her show. “Receiving it is boring and it takes forever and it’s totally not like just going on Fox News and complaining.”

She also noted that Sen. Saxby Chambliss (R-GA) skipped out on the Bergdahl briefing this week to go on Fox’s On the Record with Greta Van Susteren to complain that the White House hasn’t provided sufficient information to Congress about the Bergdahl swap.

“While he was doing that interview, the administration was conducting a classified briefing for all United States senators to explain those exact things,” Maddow added.

Not attending or leaving early from briefings and then complaining to the press, she said, “is a new and increasingly common form of political lying […] Getting away with this lie depends upon us being ignorant and easily led about what’s actually going on in that big, boring, catty high school that is Congress.”

She concluded: “If you’re skipping the briefing to complain that there’s no briefing, we’re not laughing with you, congressmen, we’re laughing at you.”