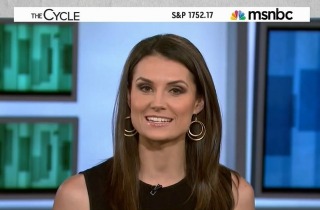 Krystal Ball, co-host of MSNBC’s The Cycle, went after those liberals on Thursday who are expressing frustration with Democratic-friendly media outlets who are covering the Affordable Care Act roll-out in an unfavorable light. “We are not propagandists,” Ball stated. “We don’t insulate ourselves into our own media bubble impervious to the reality around us.”

Ball began her segment by listing a series of imagined headlines that would be gracing stories across the country if the ACA had experienced a more successful roll-out.

“Republicans, of course, have been lying to Americans about the Affordable Care Act,” she continued, “telling them it’s a train wreck, saying this president is a bystander to his own presidency, arguing that the federal government is incompetent and can’t work.”

“Now they’ve got all kinds of evidence to back up their malicious and destructive claims,” Ball added.

“This is the first direct experience that millions of Americans will have with Obamacare,” she insisted. “This is the critical entry point to President [Barack] Obama’s signature achievement; an achievement that we’ve marched for, and rallied for, and fought Supreme Court cases and elections over.”

“I’m not trying to engage in hyperbole here,” Ball continued. “The Affordable Care Act can still work beautifully, but we’ve sure taken a giant risk — an unnecessary risk — with a dismal failure of a rollout and there’s really no excuse.”

Ball noted that Democrats risk their brand as the party of good government with a failed roll-out. She went on to say that she is “disappointed” in her liberal friends for not being more honest about the failed ACA debut.

“We’re not like them,” she said. “We’re supposed to be the one whose tell it straight even when it’s not convenient.”