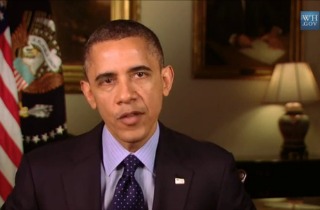 White House Press Secretary Jay Carney released a statement today responding the petition to deport CNN host Piers Morgan. The title of the press released largely sums up the tone of the piece: “When Discussing the Second Amendment, Keep the First in Mind Too.”

The petition quickly reached far above the threshold for a response, forcing acknowledgement by the White House. Carney thanked the petitioners for participating in the “We the People” petition on the White House website, but reminded them “the Constitution not only guarantees an individual right to bear arms, but also enshrines the freedom of speech and the freedom of the press.” He calls both of these values “fundamental principles that are essential to our democracy.”

Carney says the White House recognizes that the tragedy in Newtown “sparked an intense, and at times emotional, national conversation about the steps we can take as a country to reduce gun violence.” He then shares a video of President Obama speaking on the issue.

Obama, Carney reminds us, believes in the Second Amendment right to bear arms but also believes that “we should be able to keep an irresponsible, law-breaking few from buying a weapon of war.”

Morgan has long been a proponent of stricter gun laws. He recently invited the creator of the original petition on his show to discuss the issue. It quickly devolved into a crazy experience, with gun advocate Alex Jones telling Morgan, “1776 will commence again if you try to take our firearms!”

Watch the full clip below, via the White House website: