‘What Are You Talking About?’ CNN Anchor Laughs at Dem Rep. for Linking GOP to Confederacy 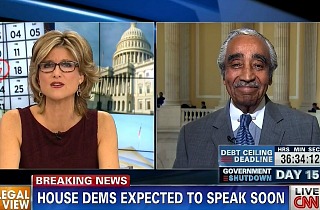 CNN anchor Ashleigh Banfield ripped into and laughed at Rep. Charlie Rangel (D-NY) in an interview on Tuesday morning after he responded to a House proposal to open the government and raise the debt ceiling in exchange for changes to the Affordable Care Act by linking the GOP in Congress to the Confederacy. Rangel added that Republicans are overtly attempting to overthrow the government of the United States of America.

“I’m certain that history is going to record that this is the lowest moment that we’ve had in the Congress,” Rangel said of the present state of negotiations between Congressional Democrats and Republicans.

“I get it,” Banfield agreed. “This whole thing has been embarrassing.” She repeated her question about just how palatable the new House GOP proposal is for Congressional Democrats.

“This isn’t a question of the House and Senate differing. This is not even a question about Republicans and Democrats differing,” Rangel replied. “This is all about a handful of people who got elected as Republicans that want to bring down our government.”

“The same way they fought as Confederates, they want to bring down the government and reform it,” he added.

“Whoa,” Banfield interjected. “I’m sorry. Are you likening — and I’m only assuming that you’re referring to the tea party members who are pretty intransigent on their views — are you liking them to Confederates?

“Well, I can tell you this, if you look at the states that they control, take a look at the Dixiecrats, see how they went over to the Republican Party,” Rangel replied.

“Michele Bachmann is not from Dixie,” Banfield interrupted. “What are you talking about?”