‘What Are You Talking About?’: Tapper Grills Sen. Inhofe on Climate Change Denial 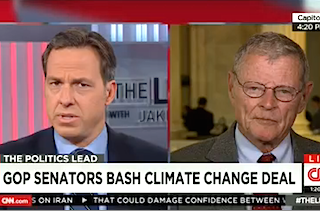 CNN’s Jake Tapper appeared to catch Sen. James Inhofe (R-OK) in a bit of a contradiction on Wednesday when he spoke to the likely new chair of Environment and Public Works Committee and avowed climate change denier about a new deal struck between the U.S. and China to reduce carbon emissions. Inhofe went on record saying he thinks China is getting off too easy in the deal, which led Tapper to ask, “Is that really your issue with the deal? I thought you didn’t think carbon emissions were a problem.”

Inhofe confirmed that he does not think carbon emissions are a problem, arguing that the “science has totally changed” on the issue over the last decade, as he does in his recent book, The Greatest Hoax: How the Global Warming Conspiracy Threatens Your Future

. The senator proceeded to argue that “as we would reduce our [emissions] and chase our manufacturing base to China, where they have no regulations, it would have the effect of increasing, not decreasing CO2.”

RELATED: Colbert Sums Up GOP on Climate Change: ‘We Don’t Know What the F*ck We’re Talking About’

“There is a scientific consensus, overwhelming, that climate change is real and at least partly man made, that some action must be taken,” Tapper replied. “Now, you’ve called it a conspiracy. What are you talking about?”

Inhofe said that the idea that the “science is settled” on this issue is “just not correct.”

“Well, the overwhelming majority of scientists disagree with you,” Tapper repeated, before moving on to another topic.

Inhofe may be correct in saying that the deal between the U.S. and China will not do enough to reduce carbon emissions worldwide, as someone who does not believe carbon emissions contribute to global warming, he’s not exactly the most reliable messenger for that message.