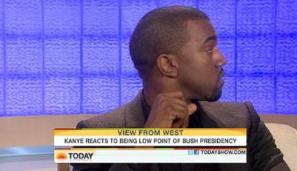 Today Lauer played more of the tape, and issued a challenge to Kanye to continue this epic battle a few weeks from now.

During the pre-taped interview Tuesday on the Today show set, West said he “empathize[d] with the idea of being pegged as a racist.” But Lauer wanted more. He asked West to “look at his face” as he played video of the President speaking out against what West had said. West didn’t like the whole exercise, and while he expressed why, his head started darting around the studio, getting agitated as he spoke:

Then he said the quote that played yesterday, although immediately after Lauer tried to prompt him with “…and you’re sorry.” And West didn’t like the words being put in his mouth.

Then things nearly came to blows! (Kidding, obviously, like this whole post.) As Lauer brought up the stage-crashing moment, the producers played the video underneath the interview, but with the sound up. Kanye didn’t let it finish:

West: Yo, how am I supposed to talk if you’re going to run this thing in the middle of when I’m talking?
Lauer: It’s under. You won’t be hearing it.
West: But I’m hearing it when I’m trying to talk!
Lauer: Ok can you take the sound out of the overheads please? Just pick up, you said it wasn’t a race thing.
West: Please don’t let that happen again. Ridiculous.

Thinking back on it this morning, Matt Lauer was ready to THROW DOWN. “There’s nothing improper about it, there’s nothing unusual about it,” he said, issuing a challenge for West to show up and say those tweets to his mf-ing FACE on November 26 (when Kanye’s booked to perform on the Today show).

Get your popcorn ready!