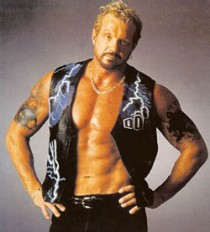 Diamond Dallas Page left the WCW/WWF world in 2002, but has kept busy by starting YRG Fitness (formerly Yoga for Regular Guys) and acted in several movies.

But there’s somewhere else you may start seeing DDP – reality TV. Here’s more from my interview with the wrestling superstar.

DDP told me about a new show being pitched to several networks, which originated as an idea between him and Chuck Zito, black belt bodyguard to the stars (Mickey Rourke and Sylvester Stallone, among others). Zito is currently embroiled in a lawsuit against F/X for their show Sons of Anarchy, which has started a war of words with the creator, Kurt Sutter.

But this idea, which DDP says came about after seeing Zito working with kids at his dojo in Upstate New York, is for a reality show, tentatively titled Road Dogs. Others slated to star in it would be former UFC fighter Tank Abbott, actor and star of Machete Danny Trejo and former Biohazard bassist Evan Seinfeld (who has some reality TV experience himself, having been a part of VH1’s SuperGroup.

“It’s about guys wanting to do guy shit, but we’re also going to make a difference,” said Page. “We have it all developed, now we’re bringing it to producers.”

He compares it to the show Bully Beatdown. “It’s a good show, but when you show up with the five of us walking around that corner, you’re going to think, ‘I don’t’ want anything to do with this,’ he said. “Like, ‘what do you want sir?'”

Road Dogs is just one of the potential reality show ideas for DDP – there are two more being thrown around by producers. But until that happens, Page continues his career with YRG, MMA and on the big and small screen. See more from my interview with DDP here…