What Caused NBC’s Meet The Press to Fall Behind Face The Nation and This Week? 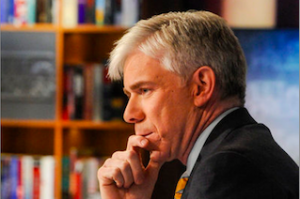 NBC’s ratings woes aren’t just limited to weekday mornings, evenings and late night. The network’s Sunday morning flagship Meet the Press–the longest-running show on network television, as its announcer reminds the audience every week–has recently fallen to a 21-year low. And as of the past few weeks, the show has come in third place on Sunday morning, trailing CBS’ Face the Nation and ABC’s This Week.

More than four years ago, the Los Angeles Times warned that the perennial “king of Sunday morning TV news talk shows could soon lose its crown,” a prediction that has been borne out in the years since. According to Nielsen data, Meet the Press is averaging its smallest total viewer audience (2.913 million) in 21 years and smallest 25-54 demo performance (854,000) in more than 21 years, dating back to the 1991-1992 season.

CBS’ Face the Nation is the clear winner, taking the number one spot away from Meet The Press for the first time in 15 years for total viewers and in 18 years for the 25-54 demo. The show even managed to maintain its lead last week when CBS was blocked from three major markets–New York, Los Angeles and Dallas–due to an ongoing dispute with Time Warner Cable. And this summer, on June 28th and August 4th, ABC’s This Week jumped to number two in total viewers and the demo, pushing Meet The Press to third place, a position in hasn’t seen in years.

NBC’s new struggles on Sunday morning are compounded by the drops in viewership they’ve seen on weekday mornings with the Today Show and evenings with NBC Nightly News. Last August, ABC’s Good Morning America beat Today in the 25-54 demo for the first time in 17 years and has maintained a consistent lead since. And just three weeks ago, ABC’s World News with Diane Sawyer won the 25-54 demo, breaking a nearly 5-year-long winning streak by NBC Nightly News with Brian Williams.

So, why is Meet the Press losing the prominence it once had? It is easy to lay blame on host David Gregory. He had large and venerable shoes to fill when he replaced the late Tim Russert back in December of 2008. Some think he goes too easy on the Obama administration while others, like myself, often think he doesn’t grill his Republican guests hard enough. He’s certainly courted his fair share of controversy in recent months, from the 30-round magazine he may have illegally used as a prop to the combative way he questioned The Guardian’s Glenn Greenwald.

This week, The Five’s Greg Gutfeld described Meet the Press as “the Sunday show for people who eat kale.” And perhaps that’s the problem. While I can tell you from my own personal experience that Gutfeld is absolutely correct, that characterization may not lend itself to the widest possible audience.

Gregory cannot pull off the elder statesman gravitas of Face the Nation’s Bob Schieffer. Nor does he seem capable of landing the bombshell interviews and explosive panels that This Week’s George Stephanopoulos can. But for now at least, Meet the Press has retained its status as the go-to Sunday show for Washington’s most powerful politicians who want to speak directly to a small, but influential audience. It may not mean much in the world of TV ratings, but that factor still gives the show clout.