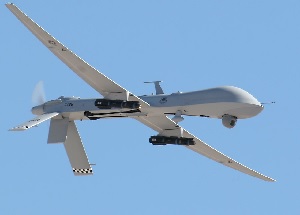 Kentucky Senator Rand Paul (R-KY) has been earning a hero’s plaudits from conservatives, and varying degrees of qualified praise from liberal media types, for his 13-hour talking filibuster of prospective CIA Director John Brennan‘s nomination. The “Fili-Blizzard,” as some are calling it, is the culmination of a bipartisan effort to wring as much information as possible out of the Obama administration on the formerly top-secret Predator Drone program, a reasonable goal that doesn’t appear to have any endgame.

While it’s true that Senator Paul’s 13-hour spectacle was pegged to a question that Attorney General Eric Holder had already answered (and answered again today), and featured heavy doses of Hitler and other nonsense, the broader notion of holding the executive branch accountable over the exercise of lethal force seems laudable. The central question that has aroused concern on both sides of the aisle, whether the President has the legal right to order the killing of a U.S. citizen on foreign or domestic soil, sounds complex and important, but those expressing concern over it haven’t made clear what it is they would do with the answer.

Ahead of John Brennan’s confirmation hearings, NBC News obtained a document that detailed the Obama administration’s legal justification for the drone program, including the killings of U.S. citizens Anwar al-Awlaki and Samir Khan. That rationale was pretty simple: the administration claimed that right under the Authorization to Use Military Force. Like it or not, that was the answer, and it let Rand Paul to wonder if the President believes that authority extends to a café in Boston.

As members of this administration have previously indicated, the US government has not carried out drone strikes in the United States and has no intention of doing so. As a policy matter moreover, we reject the use of military force where well-established law enforcement authorities in this country provide the best means for incapacitating a terrorist threat. We have a long history of using the criminal justice system to incapacitate individuals located in our country who pose a threat to the United States and its interests abroad. Hundreds of individuals have been arrested and convicted of terrorism-related offenses in our federal courts.

The question you have posed is therefore entirely hypothetical, unlikely to occur, and one we hope no president will ever have to confront. It is possible, I suppose, to imagine an extraordinary circumstance in which it would be necessary and appropriate under the Constitution and applicable laws of the United States for the President to authorize the military to use lethal force within the territory of the United States. For example, the president could conceivably have no choice but to authorize the military to use such force if necessary to protect the homeland in the circumstances like a catastrophic attack like the ones suffered on December 7, 1941, and September 11, 2001.

What he’s describing is, of course, common sense, and something that has already been repeatedly put to the test. The F-16’s that we scramble every time something dodgy happens on a commercial airliner aren’t there to hit planes with pillows. Holder’s letter didn’t really address the scenario that Sen. Paul asked about, but in Senate testimony on Wednesday, he addressed the café hypothetical with a clear “no.”

Despite that, Sen. Paul pegged his 13-hour filibuster to the question Holder just answered, but there’s an argument to be made that his tour de force at least raised awareness of a program that is problematic, at best. His filibuster prompted an even clearer response to the café hypothetical: “Does the President have the authority to use a weaponized drone to kill an American not engaged in combat on American soil? The answer is no.”

Here’s my question: what is all of this noise in aid of? What if we find out everything there is to know about the drone program, and we don’t like it? That’s been the arc so far, because even with Eric Holder’s assurances, the legal justification for this program is still far too broad, isn’t it? If only there were some way for people like Rand Paul and Ron Wyden and Dianne Feinstein to do something about it, besides filibustering the nomination of the one guy who wants to try and fix it. Really, there ought to be a law.

Congress gave the President this power, and Congress can take it away, or adjust it, however they want. It’s time they put up or shut up.