What I Learned From President Obama’s Charlie Rose Interview
video

What I Learned From President Obama’s Charlie Rose Interview 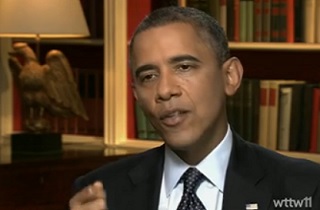 It’s been a busy week, so I’ve just now gotten around to checking out President Obama‘s feature-length interview with Charlie Rose, and as is often the case, there wasn’t much new on offer. The bulk of the 45-minute interview was comprised of things we’ve already heard about Syria and the NSA data collection programs, albeit delivered with the President’s trademark cool. Sure, I learned that the President says he’s no Dick Cheney, but I already knew that. When President Obama shoots you in the face, it’s with cool, refreshing water (but it’s probably high-fallutin’, uppity glacier water or something, amiright?). If I want to know the latest on Syria, I’ll ask Volunteer White House Press Secretary John McCain.

But there was one part of the interview that was a revelation to me:

Now, I already knew that there are no “good” options in Syria, and while everything the President says is technically news, the interview only left me with one new question. What the eff does “Katie, bar the door” mean?

Contextually, it’s obvious that it signifies impending trouble, but where does it come from? Did Sarah Palin once head down to CBS headquarters looking for a little payback?

Apparently, the phrase “Katie, bar the door” is a thing that people say, although I still need some convincing on that point. According to a guy on Yahoo! Answers, “Katie (or Katy), bar the door” is “a very American exclamation, more common in the South than elsewhere,” and there are competing theories as to its origin. The most oft-cited of these is that it comes from a poem about the murder of King James I of Scotland. As a mob is coming to kill him, his wife tells her lady-in-waiting “Catherine, keep the door,” but there was no bar for the door, so Catherine Douglass used her arm. “Alack! it was flesh and bone—no more!” she says in the poem, The King’s Tragedy. “’Twas Catherine Douglas sprang to the door, But I fell back Kate Barlass.”

The other theory is that it derives from a Scottish folk song called Get Up And Bar The Door, which is actually a really funny song. This husband and wife make a bet that whoever speaks first has to go close the door. They keep this contest going even when thieves come into the house and eat their food, but when they threaten the man and his wife, he gets up and hollers at them, at which point the wife is like “Ha! I win, get up and bar the door.”

It was either one or the other, or neither.

What I found even weirder than that phrase, though, was the fact that this lengthy interview didn’t contain anything at all, previously known or not, about the desperately important prongs on the Scandalabra™ that was blotting out the sun mere weeks ago. Nothing about the IRS, which was hyped as the second coming of Nixon’s Enemies List, nothing about the Justice Department’s (other) leak investigations, nothing about Benghazi. It’s as if all of those “scandals” were just overhyped media busywork, and the media are just the boys who cried “Katie, bar the door!”