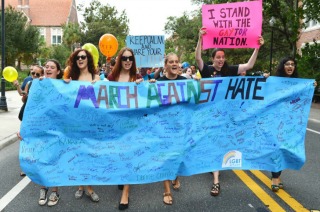 A series of offensive fliers appear on campuses using racist and sexist language. A person adorned in KKK regalia struts around a campus. Threatening anti-gay letters are slipped under dorm doors. A noose appears in an African-American student’s room. Terrifying texts arrive in cell phones employing racial language to threaten both a student and the President of the United States. What do all these recent events have in common? They are all lies.

While manufacturing claims of being the victim of hate speech carry some severe penalties, actually being the victim of discrimination is often rewarded on college campuses. While the young adults who perpetrate these hoaxes are at least partially aware of the consequences, they are just as aware of the incentives associated with being the victim of racism. A recent increase in the number of hoaxes being uncovered suggests that the cost/benefit calculation has changed. Students now seem to believe that the rewards associated with creating a myth of victimization around themselves outweigh the risks. This is a miscalculation on the part of the hoaxers, but perpetrating a discrimination hoax is not an illogical venture. It makes perfect sense for students to see the risks associated with such a hoax as acceptable.

The most recent scandal which made international headlines took place in Ohio’s Oberlin University. There, in February, police reported that the college was plagued by racism. Swastikas were painted onto the school’s doors. Pro-Hitler and Nazi slogans, vile discriminatory language, and sexual and racial slurs began showing up in fliers. Even a man in a KKK hood and robe was seen wandering the campus.

Oberlin College cancelled classes. They held a “Day of Solidarity” and a school-wide “Rally Against Hate.” Nearly 500 students turned out to march against the acts of vandalism seen around campus. The school, which has a reputation as one of the most liberal colleges in the country, was shut down. National and international headlines were written about the inexplicable outburst of anti-minority hate ironically overtaking one of America’s most liberal environments.

The police were initially warned that two white male students were behind the rash of racist and anti-gay sloganeering. The two students who would eventually confess to the hoax were, indeed, white males. They were also Obama campaign volunteers who were deeply committed to the cause of eliminating “structural racism” where it exists – even if it needs to be fabricated first.

The Oberlin hoax is not an isolated event. On Monday, a 16-year-old Jersey City high school student was revealed to have sent himself texts which threatened him, his family, and President Barack Obama.

“The 16-year-old was running for president for the Student Council in May when he supposedly received four hateful text messages,” an NJ.com report reads. “He brought them to the attention of school officials who called in his father and police.”

The threats centered around how the school would never accept a black president. The texts also referred to Obama with a racial slur and said that the mistake of electing a black President of the United States would not be repeated in that student’s preparatory school.

In February of 2012, an African-American student at the University of Wisconsin-Parkside returned to her residence to find a noose made out of rubber bands. Days later, she discovered her name on a threatening and racist “hit list.” She later confessed to writing the notes herself when the noose, a prop she had a friend construct, was not taken seriously enough. Police identified the student as the hoaxer because her name was, reportedly, the only name spelled correctly on the so-called “hit list.”

Also in 2012, a lesbian student studying at Connecticut State University reported that she was receiving threatening notes in her dormitory. Those notes, attacking her for her sexuality, were being slipped under her dorm room door. Hundreds of students turned out to march in support of the lesbian student. They could not have been aware, as investigators were not aware until they checked the footage of a camera in her dorm’s hallway, that it was the lesbian student herself who was slipping threatening notes under her door.

These are only the most recent cases of students purporting to be the victims of discrimination on campus, only to be later exposed as attention-seekers. In 2011, the University of Virginia was criticized for not suspending a law student who falsely accused the police of attacking him in order to, in his words, draw attention to “the topic of police misconduct.”

These stories never made national headlines, but other stories often do capture the nation’s attention. The infamous 2006 case against Duke University lacrosse players who allegedly raped an African-American female exotic dancer attracted the attention of every American media outlet. “That fantasy’s as old as slave masters impregnating young slave girls,” said Rev. Jesse Jackson when asked about the Duke students’ motives.

“When the prosecutors went forward, they clearly have said this girl is the victim, so why would we be trying the victim?” Rev. Al Sharpton told Bill O’Reilly in April of that year. As it turns out, District Attorney Mike Nifong was disbarred upon ethics violations after a jury found that there was no evidence any rape had occurred.

While the consequences of promoting a racial hoax are devastating for the hoaxers, the alluring appeal of celebrity – of stopping your world dead in its tracks, be that world the entire United States or merely a college campus – often proves too seductive to resist. Likewise, in Oberlin’s case, the students’ belief in the cause of anti-discrimination and Americans’ inherent racism is so virtuous that even a lie in the service of addressing those issues is justified.

As Michelle Malkin, an Oberlin alum who recalls vividly that university’s overreaction to a 1993 case in which an Asian-American student spray painted ant-Asian slurs on a campus monument, accurately identifies the incentives students consider when deciding whether to perpetrate a racial hoax.

“What did the press cover instead of this story that was right under their noses?” Malkin told Fox News Channel’s Shannon Bream. “Oberlin alum, Lena Dunham, the celebrity actress, woe is me’ing about the need for solidarity on campus when these administrators knew who was really behind it and why.”

The university culture of rewarding victimization may never change, but the press has a responsibility to report on these stories less credulously. There is ample reason to be skeptical of on-campus incidents of racism, but rarely does the press thoroughly investigate these incidents when they occur. As Malkin said, the hype and the reaction quotes generate faster, cheaper headlines. But by uncritically reporting these stories, the media creates an incentive structure for the next students who see the benefits of erecting a victimization fable around themselves.