What Is the News Value of Anonymous Letter Saying to ‘Euthanize’ Autistic Child? 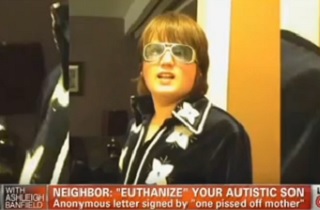 People with Autism Spectrum Disorders (ASDs) are routinely slandered in the news media, even by parents of autistic children, but a story making the cable news rounds today accomplishes the feat in a less typical fashion. The grandmother of an autistic 13 year-old in Canada received a vile, anonymous letter advising her to, among other things “euthanize” her grandson Max. The story made the news in Canada, and has now bubbled up on cable news. While other outlets have covered the story, CNN has already done several segments on it, including this Ashleigh Banfield panel, ostensibly discussing the legal angles of the letter.

This is not to pick on CNN, because MSNBC also ran video of a tearful Canadian interview with Max’s mother, Karla Begley, and other news outlets have covered it, but this legal panel really demonstrates my point. When was the last time you saw an American cable news show debate the finer points of Canadian harassment laws? When was the last time you saw one report on the contents of an anonymous letter that contained no white powder, and no threat against a public official? What is the public interest being served here?

If the author of the letter were known, or a Youtube video of the letter-writer getting the shit slapped out of her showed up, I could see the news value in that, but failing that, this Canadian law debate seems like nothing more than a pretext to get the story on the air. Why?

Someone told me bout this letter yesterday, and I said I didn’t want to read it, didn’t want to know anything about it, and if the cable news media hadn’t decided to find a way to make it a story, I could have gone my entire life not knowing what was in that letter. There are millions of parents, and millions of people with autism, who likely agree. One of the ethical principles of journalism is to minimize harm, but all this story has done is to amplify the hurt, with nothing in return but the furrowed brows of news personalities. If the media wants to do some good here, they can start by correcting all the lies they’ve told about people with autism.