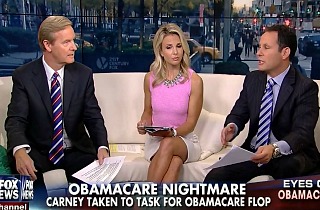 The hosts of Fox & Friends observed on Tuesday morning that the news media is “waking up” and finally beginning to ask President Barack Obama and the members of his administration some tough questions relating to the launch of the Affordable Care Act. The hosts singled out NBC News Chief White House Correspondent Chuck Todd, who interrogated Press Sec. Jay Carney on Monday over the problematic roll-out of the health care exchanges.

Brian Kilmeade began by saying that he was surprised at the tone of Obama’s Rose Garden address yesterday, which was not apologetic about the ACA roll-out failures, but defiant.

“When you see Chuck Todd get that emotional because it’s frustrating to know that this thing launched October 1st, and this is our government and they had no idea that it wasn’t ready,” Kilmeade said. “Or did they have an idea but no one can stop the train?”

“And if there is a 1-800 number, I personally think that maybe there should be a 30-day money guarantee back,” Elisabeth Hasselbeck joked.

Steve Doocy reported on some of the lackluster signup statistics that is currently plaguing the ACA’s initial roll-out. They noted that all reported numbers relating to enrolment are suspect because the government has not released the statistics.

“The mainstream media is apparently waking up,” he continued. He played a portion of a question Todd asked Carney, in which he asked who “let down” and “misled” Obama about the ACA roll-out.

Doocy said that Obama needs to let someone go over this issue. “Firing somebody, Brian, is leadership,” he said.