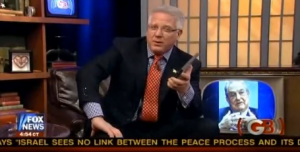 Glenn Beck has been spending a lot of time talking up his exposé on George Soros which began today and it did not disappoint. Nothing that begins with the dramatic lines “83 years ago, George Soros was born. Little did the world know, then, that economy’s would collapse, currencies would become worthless, elections would be stolen, regimes would fall, and one billionaire would find himself, coincidentally, at the center of it all” ever could. But, at the end of today’s long Soros biography, Beck revealed an interesting anecdote: Soros once sent him a present, a copy of A Face in the Crowd on DVD.

For those that don’t know, A Face in the Crowd is a 1957 film directed by Elia Kazan, whom Beck calls “a communist” (which is a bit of healthy oversimplification). It stars Andy Griffith as Lonesome Rhodes, a fraud of a man whose down-home persona brings him great fame on radio and then television but is later caught insulting his own audience. Soros isn’t the first person to make the comparison to Beck, as it’s a favorite of Keith Olbermann. However, on today’s show, Beck responded to the comparison, promising that he is “not Lonesome Rhodes.”

Check out the video of the story below, which begins with a meeting between one of Fox News’ execs and one of Soros’ higher-ups, and continues with video of some of Beck’s Soros takedown (from FNC):