What the Hatred of David Gregory Says About the Media, and Us 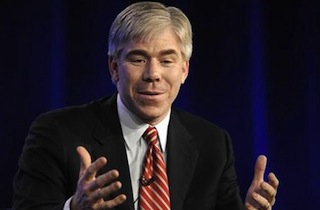 Monday was pile-on David Gregory day. After a Washington Post article initially reported that NBC News had hired a psychological consultant to examine the Meet the Press host, the Twittersphere lit up with schadenfreude: Gregory’s show was faring so poorly he required psychiatric help!

It’s hard to tell whether that glee was worse given that the report wasn’t true — NBC said it hired a brand consultant, not a psychiatric one — or if it was; in the latter case, everybody was cackling at a person’s genuine psychological troubles because we don’t like his show.

And boy don’t we like it. I’m no fan of Gregory or the Sunday shows in general, a fact to which my weekly roundups will certainly attest, but the outsized, specified, and personal hatred of Gregory long ago detached from the reality of the man. Very few of the people howling yesterday actually deplore Gregory’s weekly performance on Meet the Press on its merits, or, given the show’s winnowing ratings, even watch it enough to critique it. They dislike a refraction of it, one filtered through their ideological preconceptions and rosy-eyed view of Tim Russert captaining a supposedly bygone age of tough, aggressive media. They don’t dislike David Gregory; they dislike “David Gregory,” a patsy for the decline and fall of the media.

This is by no means an apologia for Gregory. He’s not the worst Sunday network show host—that would be George Stephanopoulos, who’s utterly incapable of discussing an issue outside the strait of electoral politics—but neither is he the best (that’s actually Chris Wallace, who most closely approximates the level of sustained and skeptical questioning we claim to want from media figures). And far from his image as a liberal water carrier, Gregory is a consummate centrist — believe it or not, a plurality of real-time Twitter criticism of MTP comes from the left — a pose too often confused with non-partisan or unbiased; while he doesn’t let frauds like Donald Trump and Ted Cruz slither by as This Week does, Gregory is too committed to both-sidesism to ever fully prosecute an issue. A guest knows when he hasn’t convinced Bob Schieffer; but on Meet the Press, mendacity throws to commercial.

None of that explains the vitriol. Other Sunday shows are dismissed; they’re not hated. Gregory has been singled out primarily because he inherited the late Tim Russert’s post. And Russert has been conscripted as a metonym for the tough, prepared interviewer that modern media no longer produces, which in turn is a metonym for some lost golden age of media.

Decline and fall narratives should always give one pause. You don’t have to search very far back to find conventional wisdom being churned out on Russert’s show, a churning that wound up in Iraq; nor do you have to dig very deep to discover criticism of Russert (“bland”) that would not be out of place applied to Gregory. This is not a takedown of Russert, but more a comment on the moral cathexis of news personalities. “Russertism” was inflated as a model of journalism just as Gregoryism is now deflated as its counterexample. The difference between the two men is real, but it’s an enforced narrative that sees that difference as comprising an entire media spectrum between tribune and hack.

This is not academic. “The media” is the go-to whipping boy every time reality doesn’t choreograph with ideology. As lefties on Twitter lash Gregory for not holding Republican guests to the fire on Obamacare, #tcot blames him for Benghazi; each thinks “the media” is the reason the public isn’t outraged or convinced. If only Tim Russert were here, the thinking goes, Obamacare would be vindicated or Benghazi would be investigated. Bunk. What’s really being pined for is “Russertism,” a dream in which once we had a stand-up media and now we don’t; “Gregoryism” is simply its nightmare expression. It’s “Luke Russert” verses “David Gregory.” Neither is real.

In fact, it’s fitting that the news bit that set everybody off yesterday turned out not to be true. The hatred of “the media” is ideological: it’s a self-sustaining idea of the world that need not reference reality, one we can believe in regardless of contradictory events. Ironically, this devotion to narrative over truth is exactly what everybody claims to hate about David Gregory.