What’s The Difference Between Occupy And MSNBC? O’Reilly And Carville Clash Over What Defines The ‘Far Left’
VIDEO

What’s The Difference Between Occupy And MSNBC? O’Reilly And Carville Clash Over What Defines The ‘Far Left’ 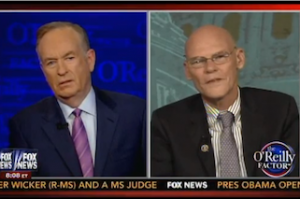 In the wake of May Day protests organized by Occupy organizations all across the country yesterday, Bill O’Reilly invited Democratic strategist and former CNN analyst James Carville to speak for “far left” movement that O’Reilly sees gaining influence in America. Carville resisted O’Reilly’s urge to lump him and the hosts over at MSNBC in with “criminals” who battle police in the street.

O’Reilly began his show by showing footage of the “communists and socialists” protesting in Seattle, where “thousands of loons took to the streets.” The host tied the actions of those protesters to recent controversial comments made by a spokesperson from Planned Parenthood and a professor at NYU to paint the picture that the “far left is running wild.”

Carville told O’Reilly that the Occupy protesters may be “far left” but they’re also “criminals” and he warned that conflating the two would be like saying all Republicans are Birthers. “Those people don’t represent any of the liberals that I know, Progressives or Democrats or whatever the heck y’all call us here on Fox.” He added later, “I can’t be responsible for every goofy person that says something and I can’t hold you responsible for every goofy right winger out there either.”

“The far right hates me more than, I think, than the far left does,” O’Reilly responded, though that statement could be up for some serious debate. He agreed that there are “moderate” liberals out there, but then suggested that his definition of the “far left” would included MSNBC. When Carville objected to the idea of equating Lawrence O’Donnell or Joe Scarborough or Rachel Maddow with violent Occupy protesters, O’Reilly pushed back. “Mr. O’Donnell openly says he a socialist,” O’Reilly countered. “That’s not a far left position?”

Carville maintained that people like Maddow, Scarborough and Mika Brzezinski should not be placed in the same “far left” box as people who attack police officers on the streets of Seattle. The most he would admit is that Reverend Al Sharpton is a “pretty liberal guy.”