What’s The Point Of Having Pundits If You Don’t Give More Credence To The Accurate Ones? 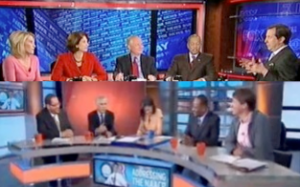 Political pundits have been lining up in droves this week to explain how they got it so wrong in their predictions of this week’s election outcome. Meanwhile, blogger Nate Silver nailed the electoral results ahead of time, and by doing so helped us look behind the curtain to make one fact about political pundits more abundantly clear to the masses: they’re just spitballing. So many pundits got the election results wrong, yet they continue on with their reputations intact and with no one trusting their judgment any less than they did last week.

I’m not saying pundits who get predictions wrong should be shunned forever and cast out of the village, but the job of a pundit is to provide your expert opinion on a certain topic, in this case politics. And pundits who predict elections have to be ready to show their work. You can’t just say that you think this is going to happen because voters trust someone more. You need to have the data on your side to prove that what you’re saying isn’t just a bunch of meaningless generic blather.

And what makes this so amusing to watch is that for weeks now, people have been absolutely hammering Nate Silver for his model. “You’re using math and statistics to figure out who’s going to win? That’s not how you predict an election. You do it by telling people who soccer moms and NASCAR dads are more likely to have a beer with at an outdoor barbecue in Scranton because they’re the regular folk!” Or something.

There are a number of pundits whose unbelievably off predictions should get the organizations that consider them experts to reconsider how highly to weigh their opinions. I don’t want to start finger-pointing here, but if you want a statistical breakdown of media prediction accuracy, Slate has documented them here.

But if you want a really good laugh, read this POLITICO piece by Dylan Byers from late last month where he quotes a bunch of other pundits, including now-infamous Silver hater Joe Scarborough, raising the strong eye of skepticism in SIlver’s direction for going against the narrative that the race is insanely close. David Brooks mocked the idea of “experts with fancy computer models” being able to predict elections, while Scarborough accused Silver of being an ideologue.

By the way, has Scarborough apologized for that yet?

Most political pundits are given these coveted host or guest spots on CNN, Fox, and MSNBC because they worked in politics, either as a candidate, as a party leader or organizer, or as an aide to a politician. But exactly how much weight should we give their opinions?

A piece last month on Gawker offers this take: none at all.

It goes on to make the point that unlike in the world of sports punditry, where people tend to have more knowledge about their field of expertise than the man on the street, the vast majority of political pundits on cable news offer no more or no less insight into politics than the average person could. And the biggest reason is because the arguments tend to be mostly superficial ones, only scratching the surface of national politics without getting into that much detail.

Your typical Fox News or MSNBC screaming match is not too far off from the kind of fights you get into with your relatives on Thanksgiving. Let’s hope that by the next presidential election, we have a pundit class made up of more Nate Silvers and less drunken uncles.