When Is A TV Show Not Just A TV Show?: Why HBO’s Girls Was Doomed To A Backlash

When Is A TV Show Not Just A TV Show?: Why HBO’s Girls Was Doomed To A Backlash 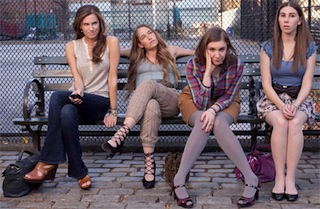 Imagine there’s a TV show coming out called Bros. It’s about four white guys hanging out in a city. It’s created by a promising, young white guy with Hollywood connections. Do you think anyone would make a fuss when this show premieres? Would they make charges about racism and nepotism? I know for a fact that they would not. How do I know this? Because there are already shows exactly like the one I’m described airing on every single channel on the dial. And no one cares.

So why are people giving Lena Dunham and her show Girls so much grief?

The new HBO series has amassed a ridiculous backlash, with tons of blogs writing think-pieces about its content, CNN doing whole segments on the racial makeup of its cast, and a fake poster insulting the people behind it going absolutely viral on the Internet. One would think that Girls was some kind terrifying combination of the works of Michael Haneke, Lars von Trier, and the Grand Theft Auto series with the way people are freaking out about it; not a silly dramedy about Brooklyn slackers wondering if they can get STDs from “the stuff that gets up around the sides of condoms?” So it’s interesting to try to figure out what’s got people so worked up.

Before we get into that, it should be noted that Girls has a bunch of aspects that would make people not like it. The most obvious reason is that the main characters are purposefully unlikable. Sure, television has been dominated for the past two decades by antiheros, but the Tony Sopranos, Walter Whites, and Vic Mackeys of the world got away with their awfulness in part because they were all great at their exciting, cinematic jobs. Dunham’s Hannah character, meanwhile, is an unemployed loser whose claims to being a great essayist are mostly treated as jokes. And, to make matters worse, the show is filled with enough unpleasant sex scenes to make the average viewer run screaming for the warm embrace of the nearest CBS procedural.

But those things would only make people dislike the show. And some people don’t just dislike it. They hate it. And I think there are two main reasons that’s the case.

The first is that, months before Girls even premiered, it was already being hailed as important and people hate being told that something is important. Hell, being important might be the worst thing that can happen to a new piece of entertainment. When you tell someone that a new show or movie is important, watching it stops being something you do for fun and becomes something you have to do. It’s work. And people rebel against work.

The same thing happened when Bridesmaids was released last year. Despite the fact that it was the year 2011 and this debate should have been settled a few centuries ago, some writer looking for a catchy headline decided that Bridesmaids was going to be the movie to finally prove that women can be funny. That ridiculous notion caught hold and all of sudden there were tons of serious, scholarly essays being written and Bridesmaids was no longer Kristen Wiig’s breakout vehicle; it was important. Unsurprisingly, the instant that happened, you started seeing Internet commenters coming out of the woodwork and actively hoping that the movie will fail.

Fortunately for Bridesmaids, it had the benefit of being gut-bustingly funny as well as being a fairly mainstream proposition with its SNL-based leads and wedding-preparation structure. The importance backlash was soon forgotten in a tidal wave of box office receipts, something that may be much harder for the pricklier, smaller Girls.

So, the the incredibly hyperbolic advance buzz that Girls received (exemplified by the rapturous New York Magazine cover story) may have made for great promotion, but it also doomed it to being vilified by any number of online haters.

One of the big complaints the show has been drawing is that all the main characters are white despite living in the incredibly racially diverse Brooklyn, New York. Normally, this fact would just go unnoticed. I mean, who really cares if the show is about white people? Obviously, it’s nice to have racial diversity, but sometimes it’s better to let a show just be what it’s going to be organically instead of shoehorning in some awful, one-dimensional token minority characters that are just there to stand around and be…ugh…sassy. However, the whiteness of Girls‘ New York hasn’t just been lightly criticized like the white New Yorks of Seinfeld or Woody Allen movies. It’s really upset people. And I think a quote from the excellent Jezebel piece, “Why We Need to Keep Talking About the White Girls on Girls,” makes it clear why.

In the piece, Dodai Stewart points out that the show of course has the “right” to be about just four white women, but it deserves to be critiqued because “it’s exclusionary, disappointing, unrealistic, and upsetting.” However, I think the most telling line of the piece is this one:

“Girls was meant to be different from what we usually see on TV: Highly current, thoroughly modern.”

Really? I just thought it was meant to be funny.

Stewart’s feelings are shared by a lot of people. Many of the columns and segments critiquing Girls on issues of race come from writers, many women, who aren’t just angry. They’re disappointed. And they’re disappointed because they wanted the show to be even more. They wanted it to be perfect as it broke barriers.

And it is breaking barriers. The struggles of young women is not something that is under-represented on television. But the voices of young women are. Yes, there are many more female showrunners now than there were a few years ago. But there should still be more. And what Dunham is doing is pretty darn new. As the show’s writer, director, and star, she’s being elevated to auteur status. This really is a show for girls and by girls; something much different than the days of Sex and the City, when the young female leads were clearly just speaking the words of middle-aged gay male writers. This was something big and it was something for women to get excited about. So, of course it was going to hurt (and hurt a lot) when the show only seemed to be about and for a small demographic. I mean, the show wasn’t called Some Girls.

But, while it would have been better if Girls had showed a fuller racial understanding, a lot of these critiques seem to be holding one little TV show up to an unfair standard that no other show has to live up to. However, that’s what happens when you break barriers. As Jackie Robinson knew, he had to be perfect on and off the field.

…whoa, whoa whoa. Perhaps Jackie Robinson is too strong and loaded a comparison. After all, no one’s threatening to go on strike just because Dunham’s getting to make a movie. They’re just making snarky comments about her weight. How about I go with a more modern example of barrier breaking? How about Tyler Perry?

Remember when Tyler Perry’s films first started breaking box office records last decade? As soon as people started writing articles about how Perry was paving the way for a new dawn in black cinema, there were plenty of other people with hand-wringing articles asking, “Are these movies good for black people?” Smart critics were freaking out that the representation that Perry was putting forth just wasn’t sophisticated enough. Black critics were saying this. White critics were saying this. I’m sorry to say that there were probably times when I said this. We couldn’t just be happy that there were movies being made by and for black people. We wanted them to be perfect art, dammit!

But that’s not fair. Tyler Perry’s movies don’t have to be perfect. They’re just movies. Once we begin holding them aloft as something more, then they’re always going to disappoint. The same thing is the case with Girls.

I don’t begrudge the conversations that are being had about Girls. Many of them, like the race one, are very important conversations and the very fact that we as a society are having them shows that we’re heading in the right direction. But maybe sometimes we should step back and have these conversations about the television landscape as a whole, not just this one TV show.

Because that’s all this is. One TV show.