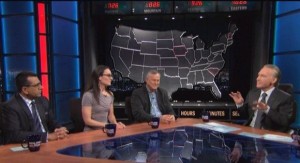 The media has been abuzz for the past two days over the allegedly confrontational conversation between Arizona Governor Jan Brewer and President Obama. Some analysts saw dark racial undertones in the way Brewer challenged the president, and on his show tonight, Bill Maher waded into this controversy and got into a loud argument with the panel over whether Brewer was being “disrespectful” towards Obama.

Martin Bashir identified the moment as part of a pattern over the past few years of conservatives attempting to make Obama out to seem more radical and liberal than he actually is. Kennedy tried to accuse liberals like Maher of holding a double standard, and if the same thing happened to Bush, they would be applauding. Maher disagreed, saying that he believes a certain level of respect should be given to the office of the presidency. Republican Dana Rohrabacher shot back, asking what Brewer said that was so horrible.

Bashir brought up the remarks Brewer made to the press after her initial meeting with the president almost two years ago, and how in her statement she described their meeting as cordial, but in the passage of her memoir that’s gotten so much attention, she describes it much differently, as if Obama was being condescending. Maher quipped, “It’s very hard not to be condescending when you’re explaining something to an idiot.”

And… it basically devolved into a verbal fistfight from there. Rohrabacher called Obama a king, Kennedy called the media sexist for their treatment of Brewer, and Maher had a fierce back-and-forth with Rohrabacher over the latest net immigration numbers and Republican racism.