Where In The World Is Obama’s Mojo? President Returns From Trip Still Hungry For Wins 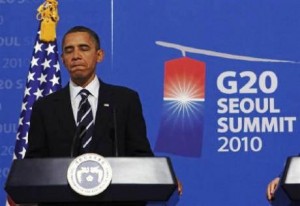 ABC’s Jake Tapper, reporting for his former show This Week, unleashed a devastating account of what transpired during President Obama’s overseas trip. And by devastating, I mean all Tapper did was list several goals of the trip that Obama failed to accomplish and show a crestfallen Obama plainly say “instead of hitting home-runs, sometimes we’re going to hit singles.” Wow, what a difference two years makes.

One of the main selling points of an Obama presidency was that he would restore America’s reputation around the world, which had been allegedly tarnished by President Bush. Sure, Obama is well liked personally by many foreign leaders, but as this trip now proved, when it truly counts, South Korea, China and other foreign leaders not only rebuffed Obama’s economic propositions, but even publicly questioned Obama’s spending habits. What has happened to our inspirational, Nobel Peace Prize-winning, rock star President?

Much has been written about the transformation between candidate Obama and President Obama, but this is getting depressing. When Obama appeared on The Daily Show and humorlessly altered his campaign slogan to “yes we can . . . but it’s not going to happen overnight” we should have realized the problem is deeper than anyone might have expected. Realism is fast replacing optimism in this President, and as silly as it sounds, Americans definitely prefer the latter to the former in their leaders.

And this is why if Obama’s outlook does not change fast, he will be seriously vulnerable to any more optimistic challenger to come along in 2012. Step one towards recovery should be monitoring what any individuals associated with the administration publicly say, like co-chair of the Debt Commission Erskine Bowles who declared “debt is like a cancer that will truly destroy this country from within.” What is sure to destroy Obama from within is allowing such “lifes of the party” to consistently put forth such a pessimistic message without some optimism to cushion the blow.

I’m not advocating Obama whistle towards the graveyard and keep Americans completely in the dark. Doses of reality should certainly be shared, but without a reservoir of optimism from which Americans can rely on, they will not have the confidence to believe their leaders are capable of dealing with the reality.

Tapper ends the piece concluding “modesty was forced upon the President in this trip full of complications.” Now what needs to be forced on Obama is the realization that Americans want to be optimistic in these tough economic times, but need a leader to show them the way.

Watch the clip below from ABC News: