Where Is The Five’s Bob Beckel? 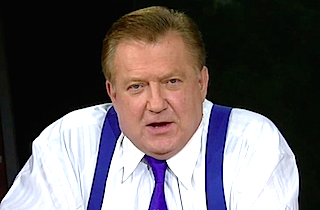 As the token “liberal” on Fox News’ popular afternoon show The Five, Bob Beckel is not exactly beloved by a wide swath of the program’s audience. But now that he has been mysteriously missing from the round table for more than two weeks, viewers seem anxious to find out where he has been. And if he’s ever coming back.

Beckel has not appeared on The Five since Monday, February 16 and in the interim, fellow left-leaning Fox personalities Juan Williams and Julie Roginsky have been filling in for him.

This means that every day for the last two weeks at 5 p.m. some variation of this happens on Twitter:

Where the heck is Bob Beckel. I never agree with his views but he is missed

@TheFive @FoxNews I am. Where's that annoying Bob Beckel???

Where is Bob Beckel? @greggutfeld

@TheFive
where is Bob Beckel is he on vacation or did he quit?

@TheFive Where is Bob Beckel??

@DanaPerino Where is Bob Beckel on The FIVE?

@DanaPerino where is Bob Beckel? He hasn't been on the Five for several weeks!

@TheFive We keep asking, where is #BobBeckel? Changed jobs? Sick? Vacation? your silence is deafening.

#TheFive Can someone at least tell us if Bob Beckel is coming back to the show? A quick tweet would be fine. @TheFive #WheresBob

Does anyone know why BOB BECKEL has been missing from @TheFive? @ericbolling ? @DanaPerino ? @kimguilfoyle ? Anyone know where he went?

@TheFive What have you scoundrels done with Bob Beckel?

@bobbeckel I can not take this much longer ! Where are you ?

@DanaPerino I hope this isn't viewed as inappropriate question, is Bob Beckel OK?

#Where is Bob Beckel?

Where is Bob Beckel? I haven't seen him on @TheFive for a month. pic.twitter.com/y0GqR03R6A

And that’s just from today.

According to a Fox News spokesperson, Beckel has been out receiving and recovering from back surgery. But our reliable sources at Fox suggested to us that there is more to the story. We’ll see.

Thanks for the thousands tweets and five face book. I am in physical therapy on my back hope to be back soon. Send me tweet if u miss me