Where Was Fox News’ John Roberts While Reince Priebus Was Losing His Damn Mind? 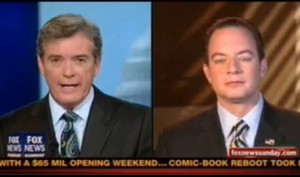 There’s a priceless clip of RNC Chairman (and Buster Bluth lookalike) Reince Preibus making the rounds of cable news shows, in which he engages in Obama derangement so stunning, even Orly Taitz was like “Take a chill pill, dude.”

In the clip, Priebus says voters must elect Mitt Romney to “save America,” and for “the sake of the very idea of America,” for “liberty and freedom,” and to prevent President Obama from ending “our way of life in America.”

The first few times I saw the clip, it gave me a good chuckle, but I naturally assumed Priebus launched this bit of guano on Hannity, or Fox and Friends, or the like (the clips they showed on other cable networks only featured Priebus). It was a surprise, then, when I discovered that these remarks were actually made on Fox News Sunday, to Chris Wallace fill-in (and former CNN anchor) John Roberts. I was interested to learn how a hard news anchor like Roberts would react to this sort of craziness.

The interview was pretty normal to start with, as Priebus did the Party Chairman Patter thing, but with a slight nervousness, like if he took a breath, Roberts would eat his soul. “The fact of the matter is this president can’t fulfill a promise,” Priebus said, before the wheels began to wobble.

“They are living in Fantasyland. And you know what,” Priebus added, hitting the “Yoda” button, “we are going to put this dream to an end, of theirs, in November…”

At this point, Roberts can be forgiven for not paying attention, but then Priebus continued, “… save America, fire Barack Obama, and hire Mitt Romney.”

Save America? Not a bombshell, but a little over-the-top. Roberts didn’t flinch, asking “Mitt Romney came out strong on the jobs numbers on Friday, is that an issue he can win on?”

“Well, not only is it an issue that he can win on, but it is an issue that we have to win on,” Priebus responded, before launching into a word salad about jobs numbers and “small ball,” then riffing into a series of questions about President Obama, like “Did he fulfill the mission that he promised this country? Did he meet the promises? Did he live the cause of America?”

The Chairman of the RNC just said that the President of the United States is a threat to liberty, freedom, and the very idea of America, nay, the American way of life, and Roberts doesn’t miss a beat. “Mr. Chairman, you talk about feeling…” Roberts began, and it was off to the next question.

Now, there are lots of folks who might think, “So? That’s just Fox News,” but when it comes to the network’s hard news programming, it isn’t supposed to be. Fox reporters and anchors have pressed Republicans hard on many occasions this election cycle. Maybe Roberts was distracted, but it’s hard to imagine another network’s Sunday show host letting this sort of thing go by without so much as a follow-up.