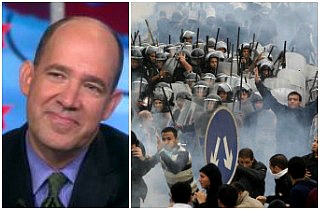 Americans who travel abroad are often afraid to discuss United States politics with foreign observers. This is not an entirely unfounded belief, but it is elevated beyond any appropriate proportion. Most American travelers overseas find the citizens of foreign nations who are well-versed in global affairs more curious about than resentful of American politics.

One theme that America’s wayfarers will find is how surprised foreign citizens are by the fact that American political fights are so vicious, that national elections are regularly disputed, that millions of disaffected citizens routinely take to the streets to protest the government, and political violence is not a feature of American life in the way it is in other nations. Well, one prominent Beltway contributor appeared to believe, perhaps even desire, to see this tradition of nonviolent political disagreement come to an end.

Over the weekend, former George W. Bush pollster and frequent guest on ABC’s This Week, Matthew Dowd, loosed a column upon the world punctuated with irresponsible metaphors. The column indicates that America is, as South Africa once was, an “apartheid” state with economic classes serving as the distinction between peoples creating a moiety separating those of a particular status. He foresees a future, along the same lines of the violent upheaval seen in authoritarian Middle East states in 2011-2012, which may address this disparity.

“Could an ‘Arab Spring’ type of upheaval be brewing in the United States?” Dowd asked on ABCNews.com over the weekend. “Is the frustration and anger toward our dysfunctional politics and economics beginning to reach a tipping point where young folks begin to push for profound change?”

“Has our democracy become so broken that citizens are going to find creative avenues to express their feelings?” he continues. One suspects by “creative venues,” Dowd is not suggesting that disgruntled Americans will resort to macaroni art to register their dissatisfaction with the direction in which the country is headed.

“I sense a movement of social unrest growing strongly and quietly towards our own version of the Arab Spring,” he continues.

Dowd goes on to observe a real and pressing issue that many Americans are dealing with, the stagnation or decline of living standards for Americans outside the Northeastern Acela corridor. However, he irresponsibly does so by linking this condition to the forcible, violent, inhuman repression of blacks in apartheid era South Africa:

For more than a generation, the middle class of this country has not seen any significant improvement in their financial situation. … The wealthiest 5 percent of America has basically garnered nearly all the gains we have seen in economic growth over the last few decades. Many in New York City, Washington, DC and small enclaves around the country have done very very [sic] well, while the rest of America is either stagnant or in decline.

“As we reflect on Nelson Mandela‘s passing it is time to ask if we have our own version of apartheid here – not by race, but by economic status,” the columnist asserts.

Had this not been a statement that so many left-leaning media professionals in the very corridor Dowd condemns found agreeable, their outrage at Dowd’s column would be deafening. Their silence is an indication of how many prominent media figures are amenable to this idea.

Had an unequivocally conservative columnist or political opinion maker issued a similar statement about how the Affordable Care Act’s winners and losers were creating an system of apartheid in America based on age and income, or how devoutly religious Americans were the victims of a repressive, institutional caste system in the United States, those media personalities who welcomed Dowd’s observation would better see its silly and offensive nature.

“The main activists in the Arab Spring were young people (and especially young men) who grew very frustrated and finally took to the streets. So why haven’t the young men (and women) of main stream America taken more to the streets here and pushed their own version of a revolution?” Dowd asks. “Maybe it is because they tried making change through regular politics and have now seen it hasn’t worked. Maybe it is because they so far are preoccupied with video games which give them an outlet and a sense of control, but will soon tire of this as they realize there is more to life and want meaning.”

Of course. The panem et circenses of video games has dulled the senses of America’s passionate youth. Dowd sees this form of entertainment, a catchall for whatever frustrates the commentary class at any given time, as one factor decreasing the incidences of violent demonstration in the streets of America’s cities. The whiff of lamentation which accompanies this observation is both evident and disconcerting.

Dowd was born in 1961. He was too young to vividly recall when the nation nearly tore itself to shreds in 1968, a period when angry young men did take to the streets to protest their circumstances, and blood did flow in the gutters of American cities, and America’s political system was profoundly altered. But so was I. An appreciation for that tumultuous period should prevent most from carelessly welcoming violence as a remedy to political differences.

The absence of video game technology may have been a contributing factor, but it is more likely that circumstances for America’s youth have changed for the better in the intervening decades. Not in an economic sense, but in their perception of how responsive the political system is to their concerns.

“There you have it,” Dowd closes his column, unconvincingly. To which, the only appropriate response is, “Indeed.”

This post has been edited since it’s original publication.