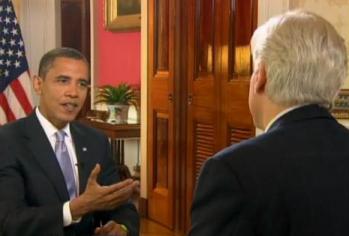 President Barack Obama wants to sell his health care plan to the American people, so yesterday he went to see three doctors – one on each broadcast news network. It was a moment to shine for three personalities who don’t normally get “gets” like President Obama.

Dr. Timothy Johnson on ABC (#174 reporter), Dr. Jonathan LaPook on CBS (#134 pundit) and Dr. Nancy Snyderman (#169 anchor) sat down for approximately 10 minute interviews yesterday – who made the most of their high-profile appointment in the spotlight?

Opening question: Politics. “Today, in the Rose Garden ceremony, you talked about the need to buck up. And it seems like it was a message to Congress. Are you concerned that your health care information – the message got derailed, a little bit when you were out of the country?”

Holding feet to the fire: After Obama says Americans are making a health care choice because of “lack of information,” she comes back with: “Is it really?”

Did he/she go there?: Yes, relating to cigarettes: “Mr. President, I know you hate this, but really, is the battle with the cigarettes going OK? I’d be remiss as a cancer surgeon not to ask you how you’re doing.”

Prognosis: A well-rounded interview that touched on everything from “buzz words” to Dr. Sanjay Gupta. Follow-up questions throughout. It got a bit uncomfortable toward the end, especially with the cigarette question.

ABC – Johnson
Opening question: Straight to the big one. “I’d like to begin with a topic you talk a lot about, waste in the present system. Everybody agrees there is waste that is a bipartisan agreement. The debate as you know starts when you talk about who is going to identify and remove the waste. In other words, there are experts who will label something as waste and other doctors or patients might say is important or even essential. So who exactly or what process exactly is going to do that very difficult job?”

Holding feet to the fire: After a lengthy comment from Obama, Johnson comes back with: “I’d like to respectfully say that at least one of them isn’t a maybe – you have to increase salaries for primary care physicians or you’re not going to get them relatively.” (Obama agreed.)

Did he/she go there?: Yes, asking a question that got Obama to comment indirectly on Sen. Edward Kennedy‘s health: “How much have you been able to communicate with Senator Kennedy – how has he been a part of this?”

Prognosis: The interview allowed for long answers from Obama, but Johnson made the questioning more personal with his own experiences. It didn’t get heated exactly, but certainly lively at times.

Check it out (partial clip):

CBS – LaPook
Opening question: Long, but unique. “Mr. President, I want to talk about the issue of cutting costs. I’m a doctor, and when I go into my office there’s an issue of doing good for the public by cutting costs, otherwise we’re all going to go bankrupt. And then, across that desk there’s this patient. And he’s looking me in the eye just like you’re looking me in the eye, and God-forbid if he should have some form of advanced cancer that he wants to take some kind of experimental drug for but the insurance company won’t pay. Ultimately is there a limit to what the health care system can pay for?”

Holding feet to the fire: After initially asking about small business owners, LaPook follows up with: “We’re already deep in the hole, how are we going to pay for that?”

Did he/she go there?: A bit, as he asked about Obama’s grandmother and her end of life: “What was it like for you to make those decisions?”

Doctorese: Obama actually asked LaPook for his thoughts on angioplasties. “There’s this thing that, if an artery is closed it’s got to be better opened. And it turns out that’s not true.”

Prognosis: Some of the questions were long, and some doctorese slipped in. But isn’t that what you want when you see a doctor conduct an interview?

So…which doctor did it best? We’ll give it to LaPook. We give credit to Snyderman for being the only interviewer to mention Obama’s smoking, and Johnson wins the “holding feet to the fire” battle with the liveliest interview. But LaPook’s unique questions outweighed his moments of doctorese, and the interview touched on topics not seen in the other two.