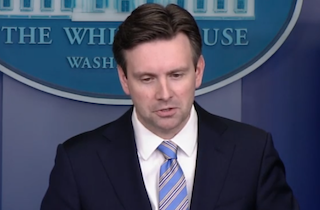 After facing criticism from a variety of sources over President Barack Obama’s decision to skip a major rally in France this weekend to honor those killed in the terror attack on Charlie Hebdo. White House Press Secretary Josh Earnest admitted during Monday’s briefing that the absence was probably a mistake.

“That said, there is no doubt that the American people and this administration stand four square behind our allies in France as they face down this threat,” he continued, citing actions taken by the president on counterterrorism over the last week.

Pressed on who should have attended the event, Earnest said, “had the circumstances been a little different, I think the president himself would have like to have had the opportunity to be there.” Despite the fact that dozens of other world leaders, including the heads of Israel and Palestine, were in attendance, Earnest said it was partly security concerns that kept Obama away.