W.H. Chief of Staff Tells Schieffer: Obama ‘Does Not’ Believe He Has Violated Any American’s Privacy
video

W.H. Chief of Staff Tells Schieffer: Obama ‘Does Not’ Believe He Has Violated Any American’s Privacy 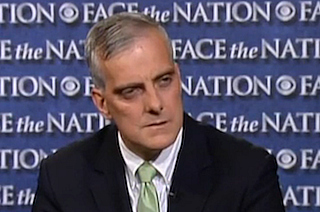 Before taking Edward Snowden to the woodshed on Face the Nation Sunday morning, Bob Schieffer questioned White House Chief of Staff Denis McDonough about the history of objections to surveillance programs within the past two administrations, while McDonough presented President Obama as a reformer of out-of-control Bush-era intelligence gathering, rather than a proponent of his predecessor’s policies.

The topic came from an article by Barton Gellman in the Washington Post on Saturday, in which he said that major officials raised concerns about the program dating back to 2004, with then-Acting Attorney General James Comey and FBI Director Robert Mueller both threatening to resign over the increasing scope of surveillance.

McDonough portrayed Obama as tightening the legal and legislative oversight on the NSA surveillance programs:

“When President Obama came into office in 2009, after being elected in 2008, he was pretty skeptical about the importance of these programs. So he took a very hard look at them. And as a result, we changed many things about how we oversee those programs. Congress now is much more robustly involved in these programs—you’ll hear that from your next guest—not just the intelligence committees, but also the judicial committees. Every member of Congress has been given a classified white paper to review. So part of what you see reflected in the Bart Gellman story is part of what the president was reacting to when he he made fundamental changes to the program.”

“Let me get you on the record here,” Schieffer said. “Does the president feel he has violated the privacy of any American?”

“He does not,” McDonough confirmed.

“You know, I think back to what Ronald Reagan used to say, ‘trust but verify,'” Schieffer said. “In this situation, it it seems the government may be asking us to trust it but they can’t verify why we ought to trust it in some cases.”

“The president is not saying, ‘trust me,'” McDonough responded. “The president is saying, ‘I want every member of Congress on whose authority we are running this program to understand it, to be briefed about it, and to be comfortable with it.’ That’s why we’ve done things like we did in 2009 and 2011 by presenting a classified white papers, inviting every member of Congress—535 members of them—to see that piece of paper, to study it and to come to us with questions. Congress has authorized these programs now in very robust debates. and those debates are to their credit. but at the end of the day, it was bipartisan majorities that enacted these.”