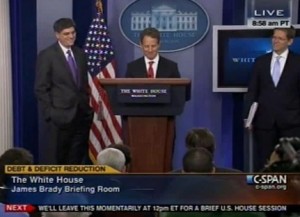 The pushback against Ron Suskind‘s upcoming (but leaked) book Confidence Men: Wall Street, Washington, and the Education of a President continued today, as Treasury Secretary Timothy Geithner and White House Press Secretary Jay Carney fielded questions about some of the book’s tales of intrigue. Geithner flatly denied that he disregarded an order from the President, while Carney attacked the book as fundamentally unreliable, and possibly plagiarized from Wikipedia.

When portions of the book leaked Friday, officials quoted by name in the tome began backpedaling, or flatly denying, Suskind’s reporting. Former Communications Director Anita Dunn, quoted in the book as calling the Obama White House a “genuinely hostile workplace for women,” told WaPo that she told Suskind “‘point-blank’ that the White House ‘was not a hostile environment.'”

Former Chairman of the Council of Economic Advisers Christina Romer, quoted in Confidence Men as saying, after being excluded by top economic adviser Lawrence H. Summers at a meeting, “I felt like a piece of meat,” told The Washington Post Friday, “I can’t imagine that I ever said this.”

At today’s White House briefing, Geithner and OMB Director Jack Lew opened up for Carney to flesh out the President’s debt and deficit reduction plan, but the subject quickly turned to Confidence Men. ABC News’ Jake Tapper talked about Geithner’s portrayal, in the book, as a “cagey political operative,” to which Geithner cracked, “That’s what my mother would say.”

Tapper asked about allegations that Geithner and the economic team “slow-rolled” the President’s orders to prep a plan for the possible dismantling of Citigroup, and a Pete Rouse memo that seemed to support them.

Geithner began by saying that he hasn’t read the book, but “I lived the reality, and the reports I’ve read about this book bear no resemblance to the reality that we lived together.”

NBC News’ Chuck Todd then followed up, asking Geithner to address the specific charge that he ignored the President’s orders.

“I would never do that,” Geithner replied. “I’ve spent my life in public service. My great privilege to serve this president, and I would never contemplate doing that.”

Geithner took another shot at the book, saying that the reality “bears no relation to the sad little stories I heard reported from that book.”

Later in the briefing, during Jay Carney’s headlining spot, Tapper asked about the book again, telling Carney he wanted to “make sure you had an opportunity to respond.”

Carney got a laugh by thanking Tapper for the chance, then said, “Look, I, too, have not read the book, although I’ve read a lot about it.  What we know is that very simple things, facts that could be ascertained — dates, titles, statistics, quotes — are wrong in this book.  So I think that — in fact, one passage seems to be lifted almost entirely from Wikipedia, in the book.”

“Based on that,” Carney continued, “I would caution anyone to assume that if you can’t get those things right, that you suddenly get the broader analysis right.  That analysis is wrong.”

Tapper followed up on the Wikipedia reference, and explained it on his blog.

Some might be surprised that the allegations about a West Wing “boy’s club” never came up, and even though Carney would definitely have referred any such questions to the statements by Romer and Dunn, you would think someone would have taken the shot, anyway. This is, of course, not the last we’ll hear about this book.

As Tapper points out, the author conducted scores of interviews, including one with the President, for the book, and while the White House might disagree with how the events were contextualized, disavowing specific quotes from it is going to be a tough sell.

Here’s the clip of Geithner’s and Carney’s responses, followed by the transcript:

Q Okay. At this point I’ll ask one other question. I wanted to give you an opportunity — there is a big splashy book out this week called, “Confidence Men,” which talks about you, portrays you as a cagey political operator. I know you’re going to take issue with your portrayal, and I’ll give you —

SECRETARY GEITHNER: It’s what my mother would say.

Q There is a memo written in February 2010 by White House senior advisor Pete Rouse, who talks about — it’s a year-one review that looks at the economic plans, and it talks about a number of efforts by, in his view, the economic team here in the White House to kind of slow roll, per the President’s orders. But it does say, once a decision is made, implementation by the Department of the Treasury has at times been slow and uneven, and that, along with the other factors, adversely affect execution of the policy process. So if you could respond to the book and also what Pete Rouse said about your execution.

SECRETARY GEITHNER: Well, obviously I do disagree with that characterization. I haven’t read this book, but to borrow a phrase, I lived the reality. And the reports I’ve read about this book bear no resemblance to the reality we lived together. No resemblance.

Q Specifically, though, Mr. Secretary, did you slow walk on the President’s effort to —

SECRETARY GEITHNER: I would never do that. I have spent my life in public service. It’s my great privilege to serve this President, and I would never contemplate doing that. But, again, I lived the original, and the reality I lived, we all lived together, bears no relation to the sad little stories I heard reported from that book.

Q I just wanted to give you the opportunity to respond to the book — the Ron Suskind book, which the entire — what seems like almost the entire White House participated in. You guys gave the author a 50-minute interview with the President. It seems like he did first-person interviews with most, if not all, of the senior players involved. He paints a picture of a President who is rolled by his advisors, and, at times, does not make tough decisions when asked, and I wanted to make sure you had an opportunity to respond.

MR. CARNEY: Thanks for that. (Laughter.) Look, I, too, have not read the book, although I’ve read a lot about it. What we know is that very simple things, facts that could be ascertained — dates, titles, statistics, quotes — are wrong in this book. So I think that — in fact, one passage seems to be lifted almost entirely from Wikipedia, in the book.

I think, based on that, I would caution anyone to assume that if you can’t get those things right, that you suddenly get the broader analysis right. That analysis is wrong. Tim Geithner, who lived it, just told you that it bears no resemblance to the reality he lived. And what I just talked about goes right to that.

The extraordinarily difficult times that this country was going through when this President took office, and the extraordinarily complex and difficult decisions that this administration — this President — took, they weren’t easy, but they were necessary. And it took decisive leadership. It took clarity of vision about where we needed to move the country. And it took a willingness to suffer political risk in order to do the right thing for the country. And that was absolutely at the heart of all the decisions the President made, and the President made them.

Q What part was lifted from Wikipedia?

MR. CARNEY: We can get that for you. It just — there’s almost a word-for-word Wikipedia.