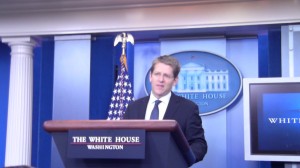 At Wednesday’s White House briefing, ABC News’ Jake Tapper asked Press Secretary Jay Carney about his criticism of GOP candidates for not reacting to the booing of a gay soldier at last week’s Republican debate, and drew a comparison between that incident and the White House’s response to remarks by Teamster head James Hoffa several weeks ago. Carney rejected the premise outright, and in a later email to Mediaite, explains why it’s “not an apt comparison.”

You may recall that Tapper and Carney had a fiery exchange over Hoffa’s comments a few weeks ago, as Tapper tried to establish lines of demarcation between the comments of surrogates, and the candidates themselves. At today’s briefing, Tapper referenced that exchange, drawing a comparison between the President’s response to that incident, and Carney’s criticism of the Republican candidates for not intervening when soldier Stephen Hill was booed.

Here’s the transcript of the exchange:(via email from The White House)

Jake Tapper:  And, lastly, I read something in the gaggle yesterday, you criticized the — or it might have been two days ago — you criticized the Republican presidential candidates I believe for — there were — there was a smattering of boos and a smattering of applause at inappropriate times during the previous Republican debates. And you were suggesting that the fact that they didn’t protest means that they couldn’t be Commander-in-Chief or —

Jake Tapper: Could you explain what you meant?

MR. CARNEY: I certainly didn’t say that. I think I said that I was surprised, I think many people were surprised, that in an instance where a solider serving in Iraq asks a question from Iraq — so he is over there in harm’s way, risking his life on behalf of every one of us, and he asked a legitimate question about “don’t ask, don’t tell” and what these candidates might do because it personally affects him, and there were boos in the audience.

Putting aside the audience — it’s not about the audience, it’s about the fact that there was no response, no one on the stage said, wait a second, regardless of what you believe about this issue, we should thank this soldier; he’s over there risking his life for us. And that was my point. And I think that it’s an important thing to note when the job that they are auditioning for is the job of Commander-in-Chief.

Jake Tapper: So just to continue —

MR. CARNEY: I didn’t suggest it was disqualifying. I was simply making an observational point.

Jake Tapper: Just to continue our conversation from a few weeks ago when you said that the President, who had not heard remarks by Jimmy Hoffa, Jr., was not responsible for them, you are saying that the Republican presidential candidates are responsible for boos —

MR. CARNEY: No, no, no, I didn’t say that at all. I was surprised that they did not — not one of them reacted. I’m not saying they’re responsible for it. I’m just making — as an observer, that —

MR. CARNEY: I didn’t say I was impartial. I’m simply making the point that there was an opportunity there to separate an issue that may be controversial — although we firmly believe that it shouldn’t be and isn’t, and that’s why we eliminated “don’t ask, don’t tell” — from the fact that this soldier is serving his country and putting his life in danger for all of us. And that was all. It was an observation; it wasn’t a — I wasn’t criticizing the audience members. I was making a point about the absence of a reaction from the candidates.

The “impartial juror” line got a laugh from the press corps, and a smile from Carney. Fox News’ Ed Henry followed up on the question a bit later in the briefing:

Ed Henry:    Thanks, Jay. I just wanted to follow on Jake real quick about — to use your words, then, why was there an absence of a reaction from the President to Jimmy Hoffa’s comments on Labor Day, if you’re now saying the Republican presidential candidates basically have a duty —

MR. CARNEY: The President wasn’t on stage, he wasn’t — he didn’t hear them. It’s a different thing when the guy is on stage and they were addressing a question to the candidates on stage.

Ed Henry: But the comments were broadcast all around the world, and it was pretty clear that one of the President’s top supporters —

For what it’s worth, I found the comparison flawed because the White House did react to Hoffa’s comments, and because there was nothing wrong with the remarks themselves. Encouraging people to vote, however saltily, is nothing like booing a serving US soldier.

After the briefing, I emailed Carney with several questions. His responses were brief, so I’ll include all three here. My questions to Carney:

On 1, as the President made clear at UNGA, his commitment to Israel’s security is unshakeable.

On number 2, no reaction to report.

On 3, the comparison isn’t apt. The President wasn’t on the stage for Mr. Hoffa’s remarks and did not hear them. At the GOP debate, the soldier in Iraq addressed his question directly to all the candidates on stage. None of the candidates said anything about the fact that he was booed.

It’s worth noting that, on the Chris Christie question, he said “no reaction to report,” not that the President had no reaction. At another point in the briefing, Carney was asked about Christie’s speech at the Reagan Library, and Carney was similarly dismissive:

Q And on Chris Christie’s speech last night, what’s your reaction to what he said, calling the President a “bystander in the Oval Office”? And did the President see any of his speech?

MR. CARNEY: I can tell you that he didn’t. We were watching the Red Sox as we were flying home — a nail-biter. Fortunately they won. Sam Stein is not here to celebrate with me. So we did not see it.

I actually don’t — I haven’t even read it yet, so I don’t really know about that. I would just say in general that in the two and a half years that Barack Obama has been President, it simply — I mean, it has been one of the most substantial periods in our history, in terms of the seriousness of the challenges we faced, the enormity of the crises and the potential even worse crises that this President faced and took head on.

When he came into office there were — I mean, remember the headlines that you wrote and others wrote: “Imminent Great Depression.” “Global Financial Collapse.” “Bank Holidays.” “Nationalization of the Banks.” “Predictions of Unemployment as High as 25 Percent.”

That’s the economic environment that we faced when we came in, and that this President addressed head on with a series of incredibly challenging decisions that he took, that by any measure arrested the extreme downward slide that this economy was taking when we were hemorrhaging jobs at more than 750,000 a month, when the economy we now know in the fourth quarter of 2008 contracted by close to 9 percent, the kind of contraction we haven’t seen since the Great Depression.

I mean, this is a — there were no bystanders in this White House.