White House: We Should ‘Celebrate’ Nurse Hickox, Not Make Her Live in a Tent 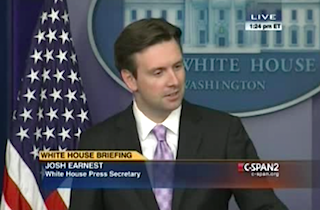 During his daily briefing Monday, White House Press Secretary Josh Earnest made an effort to defend recently quarantined nurse Kaci Hickox from the smears that have been hurled her way since she spoke out against the treatment she received upon arriving in New Jersey after working with Ebola patients in West Africa. Earnest said he had not spoken to President Barack Obama about Hickox specifically, but on behalf of the White House delivered a strong defense of her service in the fight against Ebola.

Earnest told the press corps that the feeling of at least some people within the White House is that “the service of somebody like Kaci Hickox is something that we should honor and respect.” He added, “She didn’t travel over there because she was getting a big paycheck. Presumably, she’s not going to be inducted into the nurses’ hall of fame for it. She did it out of concern for her common man.”

“Her service and commitment to this cause is something that should be honored and respected,” Earnest repeated, “and I don’t think we do that by making her live in a tent for two or three days.”

While Earnest said that individual states have the right to enact the kind of mandatory quarantine that Hickox faced in New Jersey, he said he hoped that those decision would be “driven by science” as opposed to fear. Echoing NIH head Dr. Anthony Fauci, he called the risk for Americans of contracting Ebola “vanishingly low.”

“The only way that we can drive that risk to zero is to stop this outbreak in its tracks in West Africa,” Earnest said. “And the only way that we’re going to be able stop this outbreak is if there are brave individuals like Kaci Hickox who are willing to put themselves at greater risk to try to stop it because it’s in the best interests of the American people. Again, her service and commitment is something we should celebrate.”