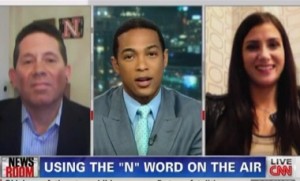 On CNN Newsroom Sunday night, Noel Sheppard, editor of conservative media watchdog Newsbusters, defended his criticism of the network’s failure to censor the n-word by telling anchor Don Lemon that “the nation is on the precipice of conceivably a very, very serious racial tension, or maybe even, heck, maybe even a race war” over the killing of Trayvon Martin and the shooting spree in Tulsa that left three black people dead and wounded two others. Breitbart.com’s Dana Loesch was also on hand to remind Lemon and his audience about what’s really important: that someone called Sarah Palin a “C U Next Tuesday” during a stand-up comedy routine.

It was a compelling, if insane, 10 minutes or so of television, but there’s really only one section that we need to unpack to truly understand what’s at play with a certain corner of the conservative web.

Last weekend, we reported on the way CNN’s language standards have occasionally been pushing the envelope recently, notably with Don Lemon’s uncensored use of the n-word when he argued that, in the context of reporting a news story, ”I don’t care what color the reporter is, I think someone should say ‘that person called him a nigger,’ rather than ‘the n-word,’ because it sanitizes it.”

That principle was put into practice the following morning when reporter Susan Candiotti quoted the Facebook page of a suspect in the Tulsa shooting spree, which said “Today is two years that my dad has been gone, shot by a fucking nigger.”

We also noted that CNN had relaxed language standards a few weeks ago, playing an uncensored clip of a 911 tape that contained the “f-word” repeatedly. Newsbusters‘ Noel Sheppard had no problem with the “f-word,” but had this thoughtful critique of Lemon’s premise:

Now, weeks after the shooting of Trayvon Martin – as the media try to fabricate a race war to assist the reelection of Barack Obama – not only are CNN employees saying n–ger on the air, a CNN host is advocating the previously offensive term be used in all reports rather than the politically correct one.

With six black shooting victims at the heart of this story, a reasonable person might think that Sheppard was referring to a war on black people, but he dispelled that in his segment with Lemon last night. After repeating the claim that a race war is imminent because people are talking about racism (not because of the racism), Lemon said “I don’t think we’re on the verge of any race war here. I think we’re beyond that in the United States.”

It’s amusing that Sheppard would confuse Michael Eric Dyson with the textbook example of modern ScaryBlackMan-itude, but is it a telling Freudian slip? Maybe not, but Sheppard also seems to have a problem telling one black pundit from another. While Dyson did appear on Face The Nation, it was Touré who talked about the possible consequences of a George Zimmerman acquittal. If you think I’m reading too much into that, remember what Sheppard claims was said, and listen to what Touré actually said:

Well, the real Michael Eric Dyson (he’s the one with the glasses) probably explained it best elsewhere on the cable dial this weekend. On Up with Chris Hayes, Dyson called out the conservative media for trying to promote the actions of marginal fringe group the New Black Panther Party to characterize what have been peaceful protests, chalking it up to “white panic.”

“During the Civil Rights movement,” he explained, “look at the reporters asking Dr. King, not about the vicious police brutality, not about segregation, not about Jim Crow, they are asking about what are the negroes going to do. We’re not going to acknowledge what we’ve done, we simply want to talk about black response. And here now black people are being put on trial, not just Trayvon Martin.”

There is a segment of the conservative media that has been eager to exploit white panic in the Trayvon Martin case (and another segment that silently watches), but watching Lemon’s interview with Noel Sheppard was the first time I’ve gotten the sense that some of them are in the grip of it. Learning to tell black people apart, and actually listening to what they have to say, are a couple of steps they could take toward escaping that grip. It also wouldn’t hurt if conservatives who know better would speak up.