‘Who Cares?!’: MSNBC Host Goes Off on ‘Pathetic’ GOP for Hyping Gruber 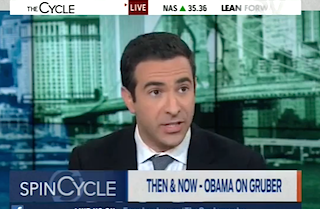 On Tuesday, Politifact informed the world that over the last week Fox News covered the Jonathan Gruber story nearly 10 times more than MSNBC did, mentioning the Obamacare “architect’s” name 779 times compared to 79 times. And when Gruber’s name is mentioned on MSNBC, it’s not always uttered with the same contempt you’ll likely find on Fox.

The Cycle’s Ari Melber proved that to be the case on Tuesday when he railed against those on the right who try to turn Gruber’s comments about the “stupidity of the American voter” into a massive scandal.

But Melber took a more aggressive approach, calling Gruber nothing more than “some dude” who shared his opinions about the law. “Who cares?!” he exclaimed, saying that Gruber did not even “work directly” on the Affordable Care Act. “I hope this is what Republicans continue to do, because it’s pathetic. And the fact that they’re so excited about this, trying to go do oppo research on some dude that no one ever cared about, no one ever heard of.”

“‘Oh my god, Barack Obama hasn’t heard of Jonathan Gruber?'” Melber said, imitating his competitors Fox News. “Neither has the American voter, which doesn’t implicate their intelligence at all. No one cares about Jonathan Gruber, I swear to you!”