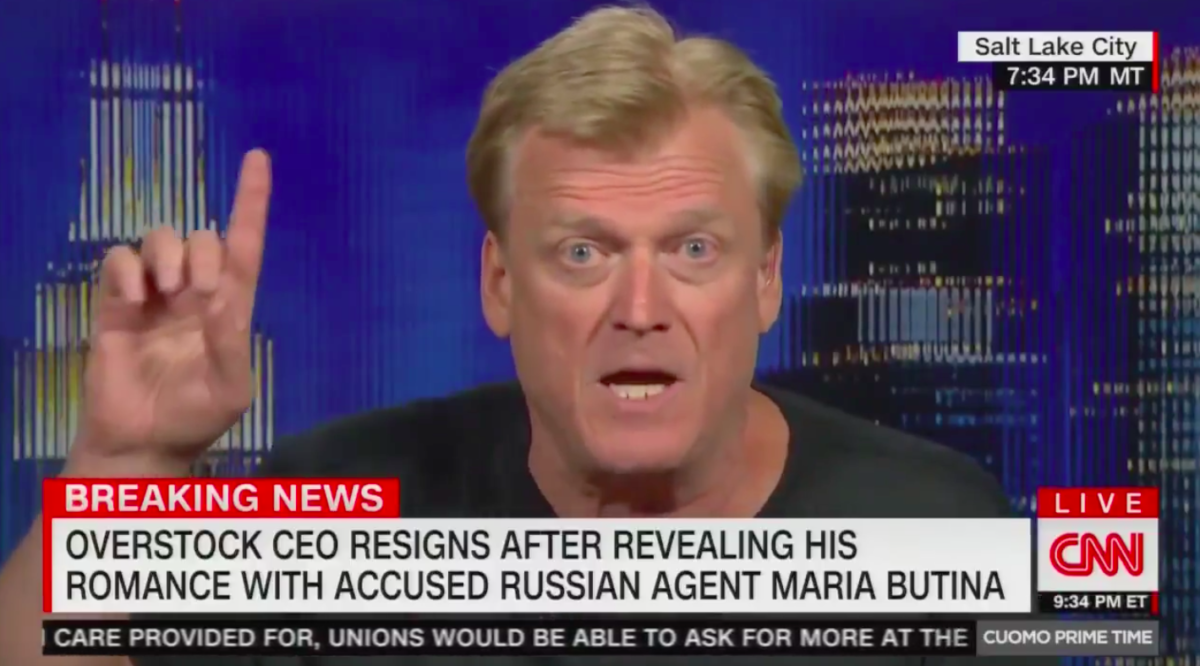 Patrick Byrne, the now-former CEO of Overstock.com, resigned from his role at the online home goods retailer after it was revealed that he was in a relationship with convicted Russian spy Maria Butina — a romance that he claims the FBI instructed him to pursue on the grounds of surveillance work.

In what likely triggered his resignation and sudden emergence to the spotlight, the Overstock founder sent out a press release this month titled “Comments on the Deep State” in which he discussed the FBI’s “political espionage,” but also included bizarre references to the 1997 film Men in Black and alleged that billionaire Warren Buffet goes by the secretive name “Omaha Rabbi.”

During a New York Times interview last week, Byrne began expounding on his claims by alluding to “problems” he had with law enforcement officials using him against Butina, who is currently serving an 18 month prison sentence in the U.S. for espionage. Byrne noted that he is still “quite fond” of Butina.

“Maria should go home and be president of Russia one day,’’ Byrne added to the Times. “That is the best thing that could happen to Russia and the U.S.”

In the lead up to his whirlwind of TV appearances, Byrne sent a dramatic letter to shareholders on Thursday stating that he had spoken with “a small set of journalists regarding my involvement in certain government matters. Doing so was not my first choice, but I was reminded of the damage done to our nation for three years and felt my duty as a citizen precluded me from staying silent any longer.”

“Though patriotic Americans are writing me in support, my presence may affect and complicate all manner of business relationships, from insurability to strategic discussions regarding our retail business,” he added while announcing his immediate resignation. (His position was filled by interim CEO Jonathan Johnson, who is an Overstock board member).

Since stepping down, Byrne has launched an all-out war on “the deep state” via a flurry of TV appearances on seemingly every network who will hear out his web of claims. His allegations range from saying the FBI used him to carry out “espionage” against both Hillary Clinton and Donald Trump, to pointing fingers at former federal agent Peter Strzok and former FBI Director James Comey for supposedly ordering him to do so.

Check out his four craziest TV moments below:

Byrne Breaks Down into Tears on Fox Business, Alludes to ‘Deep State’ Threatening Him

During his first TV appearance since making the explosive claims, Byrne told Fox Business anchor David Asman that the “deep state” is personally threatening him for speaking out about their purported espionage efforts.

“I’ve been warned that if I come forward to America, that the apparatus of Washington is going to grind me into a dust,” he claimed in the interview — all while wearing a Grateful Dead hat with “Make America Great Again” scrawled onto it.

Byrne said that he had helped the FBI with a murder case in the past, so they approached him in 2015 to aide in their surveillance of 2016 presidential candidates. He also claimed to have special information on a “big coverup” attempt to hide federal law enforcement’s “political espionage,” which he alleges was carried out against candidates Trump, Clinton, Marco Rubio, and Ted Cruz.

Byrne also insisted his assertions are not just “a theory”: “This isn’t a political position. I was in the room when it happened. I was part of it. I thought I was doing law enforcement. Sorry.”

“But the issue is, I realized that these orders I got came from Peter Strzok, and as I put together things, I know much more than I should know and it’s right to keep silent,” he continued. “This country’s gone nuts.”

Byrne proceeded to burst into tears twice after discussing gun violence and his relationship with Warren Buffet, while also claiming that he was “offered a billion-dollar bribe to keep quiet.”

Additionally, the Overstock founder tore into Fox Business guest Jonathan Hoenig during the lengthy segment in response to a question on Overstock’s value rallying after his resignation.

“Who the hell was that!?” Byrne exclaimed. “Who was asking that question? What’s the name of that fool? You’re a fool!”

During an appearance on CNN Thursday night, Byrne expounded upon his intimate relationship with Maria Butina and claimed that the FBI advised him to pursue her on more than one occasion.

“Just to be clear Patrick, so people understand what’s going on here, the FBI wanted to you continue your association to get information,” CNN host Chris Cuomo asked while attempting to make sense of his guest’s comments. “They never told you you needed to have romantic relationship with somebody?”

“Well, eventually, yes they did,” Byrne replied; he then suggested that the relationship orders came straight from then-FBI Director James Comey.

To make a point about officials approaching him in the lead up to the 2016 election, Byrne again referenced the ’90s Will Smith sci-fi classic.

“The Men in Black,” he seethed, before claiming that the FBI explicitly told him: “This never happens in the United States. We’re the good guys. We don’t work like the bad guys. But we need to ask to you rekindle a romantic relationship with Maria Butina.”

Later in his interview with CNN, Byrne told Cuomo that the FBI allowed the investigation into Russian interference and Trump to go on in an attempt to damage the GOP.

“They’re letting this can-o-scandal develop and someday they’re going to shake it up and crack it and spread it all over the Republican Party,” Byrne said he realized in 2016.

After the conclusion of Robert Mueller’s special counsel investigation, Byrne added that it became “clearer it was more about blackmail than it was law enforcement.” (He declined to say who was being blackmailed or what it was for).

After appearing on Fox Business, Byrne made his way over to Fox News for an interview with Martha MacCallum. There, he elaborated on who was giving him these “fishy orders” to gather intelligence on candidates, advised reporters to find and approach Strzok with his claims, and suggested that Comey should be very worried about his coming forward: