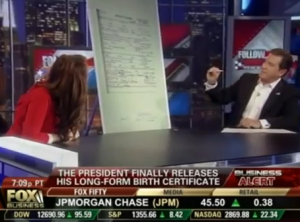 To answer the question of why some stories will never ever die, last night on Follow the Money, host Eric Bolling invited political activist and “Birther” crusader Pamela Geller on to analyze the authenticity of the long-form birth certificate released yesterday by President Obama. Geller not only thanked Donald Trump and bemoaned “how the media protects [Obama],” but she also thought there was a possibility that this document was altered. Here we go again.

Geller argued that before she makes a hasty judgment about its legitimacy, this certificate needs a digital forensic examination analysis. After all she does have to maintain her credibility. And since she claims to have already “exposed” how Obama’s short-form birth certificate was altered, she has serious worries about this new document too. Geller already believes the border on this long-form is “suspect.” Oddly, Bolling has some questions too.

Bolling commented on how strange it was that the family of the doctor in Hawaii who delivered Obama were clueless about Obama’s birth and he wondered, “if you gave birth to the President of the United States, don’t you think your family would know about it?” Then after Geller made her case, Bolling concluded about whether the document was altered, “it may or may not be, but it certainly opens up the can of worms that there are at least questions for it.” Even more strange was how Fox contributors Dr. Keith Ablow and Monica Crowley, who were also guests on the panel, appeared to just nod at some of Geller’s rantings. Oh well, guess one shouldn’t get too worked up about failing to convince everyone about anything these days.