Who Will Be First Media Outlet To Call Mitt Romney’s China Trade Statement A Lie? 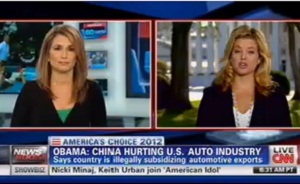 As President Obama heads to Cincinnati for campaign events today, his administration’s US Trade Representative has announced a new trade complaint against China. While reporting the news, media outlet will be forced to include a statement released by Republican presidential candidate Mitt Romney blasting the move as purely political, and accusing the President of spending “43 months failing to confront China’s unfair trade practices,” and if they’re doing their jobs, they will also point out that Mitt Romney is lying. Early signs are not good.

News organizations have become far too complicit in post-truth politics, often reporting campaign statements without making the slightest effort to evaluate them, or even displaying any indication that they feel a duty to do so. If Mitt Romney released a statement saying “President Obama has spent far too much time consuming the livers of his murder victims, and played clear favorites with the fava bean and Chianti industries,” you wouldn’t expect some reporter to read it, then blithely toss to a studio anchor, who then moves on to the next topic.

That’s pretty much how it went down when CNN’s Brianna Keilar reported on the first part of this statement from Romney:

“President Obama has spent 43 months failing to confront China’s unfair trade practices. Campaign-season trade cases may sound good on the stump, but it is too little, too late for American businesses and middle-class families. President Obama’s credibility on this issue has long since vanished. I will not wait until the last months of my presidency to stand up to China, or do so only when votes are at stake. From Day One, I will pursue a comprehensive strategy to confront China’s unfair trade practices and ensure a level playing field where our businesses can compete and win.”

Anchor Carol Costello teed Keilar up by reporting on the USTR’s complaint against China, and in discussing it, she and Brianna Keilar repeatedly made reference to the political benefit of the trade complaint. Costello noted that the President’s Ohio trip “comes as his administration gears up to file a trade complaint against China, accusing the country of illegally subsidizing the cost of auto parts and auto exports. The auto industry, as you know, is a crucial part of Ohio’s economy.”

“Yes,” Keilar agreed, “A crucial part of Ohio’s economy, and other battleground states as well,” and added “No coincidence there.”

Keilar introduced the Romney statement by saying “and I should tell you that the Romney campaign has put out a response a short time ago. Their response to this, which obviously the expectation is that it would play very well with voters who are concerned about the auto industry in these states, Carol, it says ‘President Obama has spent 43 months failing to confront China’s unfair trade practices. Campaign-season trade cases may sound good on the stump, but it is too little, too late for American businesses and middle-class families.'”

“This is a huge issue,” Keilar concluded, “as these candidates are fighting for votes in areas where the auto bailout and auto industry are big issues.”

Set aside the fact that Keilar and Costello both framed the trade complaint as being timed to coincide with the President’s Ohio trip, rather than the other way around. They also conveyed the Romney statement’s accusation that this action is an isolated effort to garner votes, while also failing to point out that the Romney statement is a lie.

Romney said “President Obama has spent 43 months failing to confront China’s unfair trade practices,” which is a specific offer of fact that is not true. This is the Obama administration’s ninth such action, dating back to 2009, which also renders false Romney’s passive-aggressive assertion that President Obama waited until the last months of his presidency to stand up to China, “or do so only when votes are at stake.”

Costello and Keilar also failed to point out that Romney, himself, blasted the President for taking actions against China that he now says Obama never took. In his book No Apology, Romney wrote that ““President Obama’s action to defend American tire companies from foreign competition may make good politics by repaying unions for their support of his campaign, but it is decidedly bad for the nation and our workers.”

At a bare minimum, though, hey should have reported the administration’s extensive trade actions against China, and as this statement is read by other news anchors throughout the day, hopefully one of them will point out that it’s a lie. There are legitimate conversations to be had about trade policy with China, and it would be fair to discuss what effect those nine trade complaints have had, or what effect Romney’s promised trade war with China would have, but no conversation can begin with a lie like this.

This post has been updated to reflect the fact that today’s trade complaint is the ninth of its kind by the Obama administration, not the eighth.