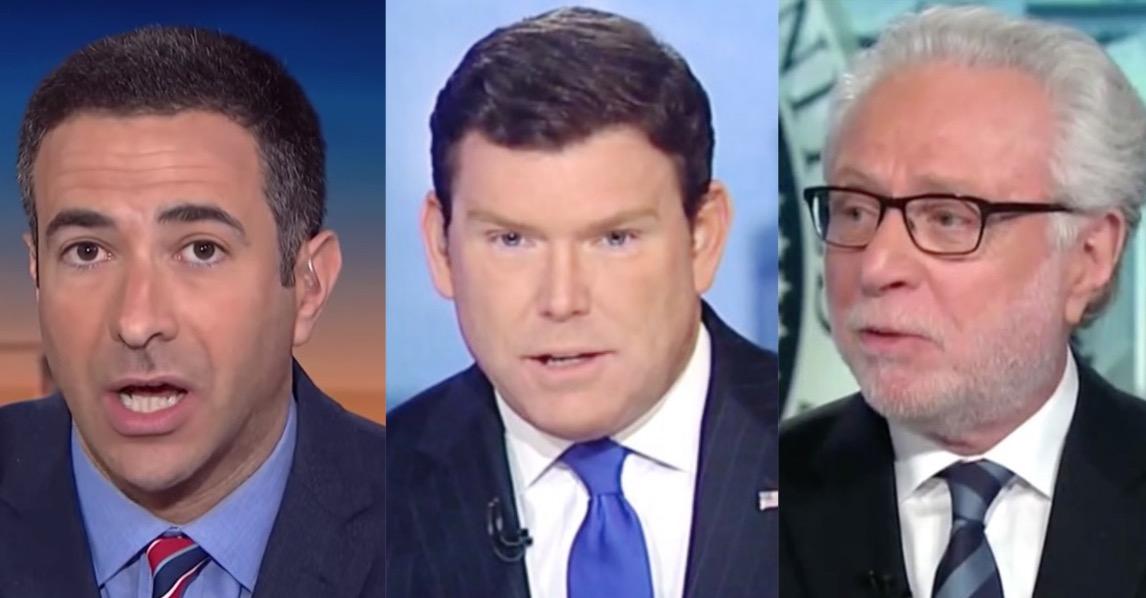 Mediaite’s ranking of the Best Cable News Show at 6 p.m. dropped on Friday, naturally to much fanfare. We’ve been running this ranking since we took a look at the 9 a.m. shows on Fox News, CNN and MSNBC, but we only recently had the bright idea to run a reader poll alongside our official ranking so we can see what you guys think about the shows we cover (in a slightly more statistical way than just staring at our frenetic comments section.)

This week, we took a look at the shows competing for the best program at 6 p.m. The competitors: The Situation Room on CNN, hosted by Wolf Blitzer; Special Report on Fox News, hosted by Bret Baier; and The Beat on MSNBC, hosted by Ari Melber.

It’s serious competition, and perhaps the most talent and star-power crammed into the three shows we’ve seen in our rankings yet. Blitzer needs no introduction: he’s Wolf. Baier holds a similar status over at Fox, as the patron saint of the biggest network’s hard news division. Melber, incredibly, gives them both a run for their money by delivering what might be the most innovative and weirdest (in a great way) news program on cable.

We ultimately gave Baier the top slot, for simply how impressive his news program is. Special Report is the gold standard at Fox, and is highly regarded by other networks as well.

As for Blitzer, he’s a veteran, but 6 p.m. marks the second hour of the Situation Room, and the show loses it’s steam a touch. He placed third, a tough break for members of the Wolf Pack, of which there are a few at Mediaite HQ.

Ari Melber, meanwhile, came in second. His show is wildly unpredictable (as we mentioned in our official ranking: Fat Joe feat. Bill Kristol is a collab only seen on The Beat) but also a solid hour of hard hitting analysis with a legal bent.

Our readers apparently agreed with us! Here’s how you placed those hosts:

What is the best cable news show at 6 p.m.: Special Report with Bret Baier, The Beat with Ari Melber, or the Situation Room with Wolf Blitzer? Our ranking drops this afternoon. VOTE HERE:

It was a very tight race between Baier and Melber, with the Fox News anchor pulling away to a 1 point victory in the last hours of polling.

Check back next week for our rankings for 7 p.m.