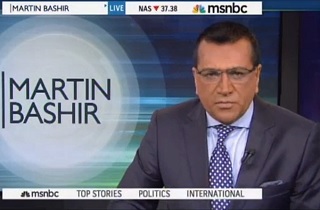 On Friday, MSNBC host Martin Bashir delivered a blistering commentary in which he suggested that former Governor Sarah Palin (R-AK) deserved the same treatment as that described in the diary of British overseer Thomas Thistlewood’s diary. Bashir’s commentary was pegged to remarks that Palin made last week, comparing public debt to slavery. At the top of Monday’s show, Bashir delivered a lengthy, abject apology for his remarks, and promised to learn from the experience.

On Friday, Bashir lit into Palin, referring to her as America’s “resident dunce” and characterizing her remarks as “scraping the barrel of her long-deceased mind, and using her all-time favorite analogy in an attempt to sound intelligent about the national debt.”

He then played a clip of Palin’s comments from last weekend, in which she told a crowd at Iowa’s Faith and Freedom Coalition event, “Our free stuff today is being paid for by taking money from our children, and borrowing from China. When that note comes due — and this isn’t racist, so try it. Try it anyway. This isn’t racist. But it’s going to be like slavery when that note is due.”

“It will be like slavery,” Bashir repeated. “Given her well-established reputation as a world class idiot, it’s hardly surprising that she should choose to mention slavery in a way that is abominable to anyone who knows anything about its barbaric history.”

“So here’s an example,” Bashir continued. “One of the most comprehensive first-person accounts of slavery comes from the personal diary of a man called Thomas Thistlewood, who kept copious notes for 39 years. Thistlewood was the son of a tenant farmer, who arrived on the island of Jamaica in April 1750, and assumed the position of overseer at a major plantation.”

“What is most shocking about Thistlewood’s diary is not simply the fact that he assumes the right to own and possess other human beings, but is the sheer cruelty and brutality of his regime,” Bashir added. “In 1756, he records that a slave named Darby ‘catched eating kanes had him well flogged and pickled, then made Hector, another slave, s-h-i-t in his mouth.’”

“This became known as ‘Darby’s Dose,’ a punishment invented by Thistlewood that spoke only of inhumanity. And he mentions a similar incident in 1756, his time in relation to a man he refers to as Punch. ‘Flogged punch well, and then washed and rubbed salt pickle, lime juice and bird pepper, made Negro Joe piss in his eyes and mouth,’” Bashir recited.

“I could go on, but you get the point,” Bashir said, concluding “When Mrs. Palin invokes slavery, she doesn’t just prove her rank ignorance. She confirms if anyone truly qualified for a dose of discipline from Thomas Thistlewood, she would be the outstanding candidate.”

You can see the original commentary here.

Bashir opened Monday’s show with a complete and abject apology. “Last Friday, on this broadcast,” bashir said, “I made some comments which were deeply offensive and directed at Governor Sarah Palin. I wanted to take this opportunity to say sorry to Mrs. Palin, and to also offer an unreserved apology to her friends and family, her supporters, our viewers, and anyone who may have heard what I said. My words were wholly unacceptable. They were neither accurate, nor fair. They were unworthy of anyone who would claim to have an interest in politics, and they have brought shame upon my friends and colleagues at this network, none of whom were responsible for the things that I said.”

“In the battle of ideas, America leads the world in whole-hearted discussions and disagreements,” he continued, “and these arguments can be heard on a daily basis. But what I did on Friday had absolutely nothing whatsoever to do with that great tradition, and I am deeply sorry. Upon reflection, I so wish that I had been more thoughtful, more considerate, more compassionate. but I was not. And what I said is now a matter of public record.”

“But if I could add something to the public record,” Bashir added, “it would be this: That I deeply regret what I said, and that I have learned a sober lesson in these last few days. That the politics of vitriol and destruction is a miserable place to be, and a miserable person to become. And I promise that I will take the opportunity to learn from this experience. My hope is that it will renew in me a spirit of humility and humanity, that looks for the good and that builds upon the great things that this country has to offer to all of us, regardless of our political persuasion. This will be my guiding light and compass in the days ahead. But once again, I am truly sorry for what I said on Friday.”